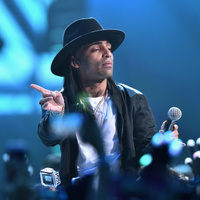 Arcangel Net Worth: Arcangel is an American singer-songwriter who has a net worth of $10 million. Arcangel was born in New York in December 1985. His mother was part of the all-women merengue group Las Chicas del Can. He moved to Puerto Rico in 2002 and formed the underground reggaeton act Arcangel & De La Ghetto. They were signed and gained fame with their 2006 hit single "Ven y Pegate". The group released studio albums in 2007 and 2003 and also featured the singles "Ella Quiere" and "Aparentemente". After the duo separated in 2007 Arcangel started performing solo and appeared on compilation albums. His single "Chica Virtual" peaked at #9 on the Billboard Latin Rhythm Airplay chart and #22 on the Billboard Hot Latin Tracks chart. Arcangel's debut solo studio album La Maravilla was released in 2008. The same year he released the album El Fenomeno. In 2013 his third album Sentimiento, Elegancia & Maldad was released. His singles "Pa' Que la Pases Bien" and "Por Amar a Ciegas" became successful on American Latin urban radio stations in the United States. Arcangel has worked with De la Ghetto, Dyland & Lenny, Ivy Queen, and Daddy Yankee.