Antonio Aguilar net worth: Antonio Aguilar was a Mexican singer, actor, songwriter, film producer, screenwriter, and equestrian who had a net worth of $20 million at the time of his death. Antonio Aguilar was born in Villanueva, Zacatecas, Mexico in May 1919 and passed away in June 2007. As a singer he recorded more than 150 albums and sold 25 million copies.

As an actor Aguilar starred in more than 120 films. He won a Premios ACE Award for Cinema – Best Actor for Emiliano Zapata in 1972 and an Ariel Award in 1997. Aguilar received a star on the Hollywood Walk of Fame in 2000 for Recording at 7060 Hollywood Blvd. He was married twice including to Flor Silvestre and had two children Antonio Aguilar Hijo and Pepe Aguilar. He was related to Leonardo Aguilar, Angela Aguilar, Guadalupe Pineda, Dalla Ines, Marcela Rubiales, La Prieta Linda, and Mary Jimenez. Antonio Aguilar passed away on June 19, 2007 at 88 years old from pneumonia. 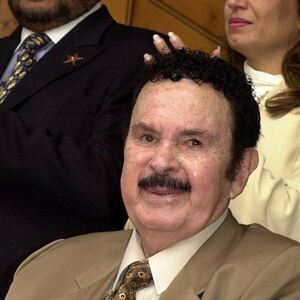