Romeo Santos net worth: Romeo Santos is a Dominican-American singer who has a net worth of $30 million. Romeo Santos was born on July 21, 1981 in The Bronx, NY. His father was of Dominican descent and his mother Puerto Rican. He started singing in a church choir at the age of 12. Romeo got his first taste of success as the featured composer and former lead singer of the Bachata group Aventura.

Aventura was a self-created band founded by Anthony Santos, Henry Santos, Lenny Santos and Max Santos. The group was formed in 1994, three of the band members are from The Bronx and one of them was born in the Dominican Republic. They got their big break in 1999. Their mission was to fuse bachata music with more popular modern sounds such as hip hop and R&B. This new band was the second group to completely sell out Madison Square Garden. Today Romeo is a highly successful solo artist. Santos released his debut single titled "You" on May 9, 2011. This was the first single from the debut album Formula that was also released in 2011. A second single from the debut album "Promise" was released, this song featured a duet with Usher. This single peaked at number one on both the Tropical Songs chart and the Hot Latin Songs chart. In July 2014, Romeo Santos became one of only a few musical acts who has ever successfully sold out two shows at Yankee Stadium's 50,000 seats for a concert. That's an accomplishment that bands like Metallica, Pink Floyd and fellow hometown hero Jay-Z could not accomplish (technically Jay sold out Yankees stadium with Justin Timberlake). As of this writing, Romeo has 200 million subscribers on YouTube. One of his videos has been 350 million times on YouTube. 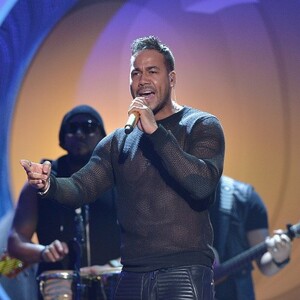