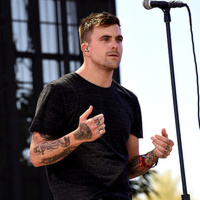 Anthony Green net worth: Anthony Green is an American musician who has a net worth of $2 million. Anthony Green has earned his net worth as lead singer for the American progressive rock bands Circa Survive and Saosin. Anthony Green was born on April 15, 1982 in Doylestown, Pennsylvania. Circa Survive was formed in 2004. Prior to that Green was a member of the bands Saosin, The Sound of Animals Fighting, Audience of One, Jeer at Rome, High and Driving, and Zolof the Rock and Roll Destroyer. He also appeared in the Season 4 Episode 20 of L.A. Ink, a television documentary by American tattoo artist and television personality Kat Von D. He is also known as Skunk, Siren and Moshtradamus. His nickname Skunk came from his days as a member of The Sound of Animals Fighting band, where each member wore an animal mask to hide their personas and give the band creative inspiration. Green has been an active member of the music industry since 2000, his genres include: Indie rock, alternative rock, emo, progressive rock, math rock, post-hardcore, and experimental rock. In December 2005, Green started his solo tour with a mini tour; opening for Fred Masherino formerly from Taking Back Sunday, the tour included a stop in his hometown of Philadelphia, PA the sold out concert was recorded live. His first solo album Avalon was released in August of 2008, it peaked at #44 on the Billboard 200 charts in the United States. Green has released a number of solo albums and 9 studio albums with Circa Survive. The band has toured extensively around the world.