Anthony Field net worth: Anthony Field is an Australian musician and actor and has a net worth of $20 million. Anthony Field earned his net worth from playing in the band The Cockroaches and becoming a member of the children's group The Wiggles. He was the youngest of seven children, and grew up in the suburbs of Sydney. He came from a long line of musicians, especially the women in his family. He enrolled in Macquarie University to study Early Childhood Education. There he met the other members of The Wiggles, guitarist Murray Cook, vocalist Greg Page, and pianist Phillip Wilcher. He worked as a preschool teacher for two years before the success of The Wiggles forced him to quit. He originally wore a green shirt during their concerts, but after a short time switched to blue because green became associated with the Wiggles character Dorothy the Dinosaur. He was named as "Bachelor of the Year" in Cleo Magazine, and married Michaela Patisteas, a former dancer, in 2003. In2007, he did some voiceover work for the TV show "RSPCA Animal Rescue," for Channel 7 in Australia. They have three children. He is a registered breeder of miniature fox terriers. His boat, the "Lucia and Miki" (named for his daughter and wife), is featured in new episodes of The Wiggles (2005). The names are in English on one side of the boat and in Greek on the other. In 2007 he went public about his experience with clinical depression to draw more attention to the condition. Anthony Field was born on May 8th, 1963 in Kellyville, New South Wales. He is a devout Catholic and wears two large tattoos on his arms. One is the Virgin Mary and the other is a heart. The names of his wife and his three children are also tattooed on his arms. 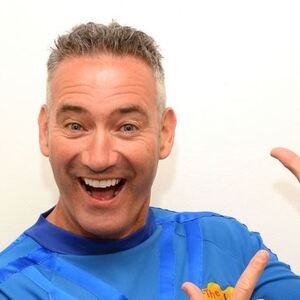