What is Annie Lennox's Net Worth?

Annie Lennox OBE is a Scottish musician and activist who has a net worth of $60 million. Lennox is known as a member of the Eurythmics and for a successful solo career that has spanned more than four decades. To date, the Eurythmics alone have sold more than 80 million records worldwide. When combined with tens of millions of solo albums sold, Annie is one the best-selling musical artists in history.

Lennox's solo career began in the early '90s with her debut album "Diva" (1992) landing at #1 in the U.K. and #23 in the U.S. It eventually went double platinum, and her follow-up effort, the 1995 cover album "Medusa," claimed the top spot in the U.K. and eleventh in the United States. "No More 'I Love You's" became Annie's best-debuting single in the United Kingdom at number two and earned her a Grammy Award for Best Female Pop Vocal Performance. She went on to release four more solo studio albums: "Bare" (2003), "Songs of Mass Destruction" (2007), "A Christmas Cornucopia" (2010), and "Nostalgia" (2014). In 2011, Lennox was appointed an Officer of the Most Excellent Order of the British Empire for her charity work.

Annie Lennox was born on December 25, 1954, in Aberdeen, Scotland. She is the daughter of Thomas and Dorothy Lennox. She began studying piano, flute, and harpsichord at London's Royal Academy of Music at the age of 17. Annie received a student grant, and she worked as a shop assistant, waitress, and barmaid to earn money and performed with a few bands during her time at the Royal Academy. In 1997, the school made Lennox an honorary Fellow.

Lennox played flute with the band Dragon's Playground in 1976 and sang lead for The Tourists in the late 1970s. After The Tourists disbanded in 1980, Annie and band mate Dave Stewart formed Eurythmics, releasing the album "In the Garden" the following year. The duo released six more studio albums before Lennox went solo in 1990, spawning hit singles such as "Sweet Dreams (Are Made of This)" (1983), "Who's That Girl?" (1983), "There Must Be an Angel (Playing with My Heart)" (1985), and "Thorn in My Side" (1986). Eurythmics reunited in the late 1990s, releasing the album "Peace" in 1999. Annie released her debut solo album, "Diva," in 1992, and it went 4x Platinum in the U.K. and 2x Platinum in the U.S. and Canada. The album featured the singles "Why" and "Walking on Broken Glass," which both reached the top 10 on the U.K. charts. "Rolling Stone" magazine included "Diva" in their 1999 "Essential Recordings of the 90's" list. 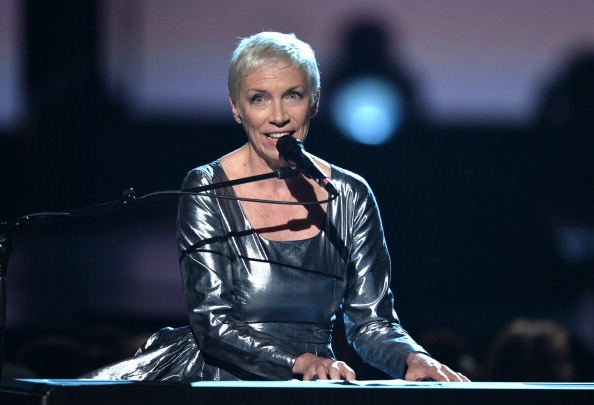 Lennox's second solo album, 1995's "Medusa," included covers of songs by Neil Young, Bob Marley, and Paul Simon and went 2x Platinum in the U.S., U.K., and Canada. In 2003, Annie released her third solo album, "Bare," and embarked on her first solo tour, and in 2004, she toured North America with Sting. She then released 2007's "Songs of Mass Destruction" and 2009's "The Annie Lennox Collection" before putting out a holiday album, "A Christmas Cornucopia," in 2010. In 2012, Lennox performed at the Queen's Diamond Jubilee Concert and the Summer Olympics Closing Ceremony, and two years later, she released the album "Nostalgia," which included covers of songs she loved as a child, such as "I Put a Spell on You," "Summertime," and "Georgia on My Mind."

Lennox began working with the Sing Foundation in the late 1980s, and in 1990, she recorded a cover of "Ev'ry Time We Say Goodbye" for "Red Hot + Blue," a Cole Porter tribute album that benefited AIDS awareness. Annie and Dave Stewart donated the profits from the Eurythmics' 1999 tour to Greenpeace and Amnesty International. In 2007, Lennox created The SING Campaign, a charitable organization that raises money and awareness for women and children living with HIV and AIDS. That year she also took part in the Nobel Peace Prize Concert in Oslo, Norway.

In 2010, Annie became a UNESCO Goodwill Ambassador for AIDS, and she was honored with the Music Industry Trusts Award in 2013. In 2015, she participated in the 50th Amnesty International Annual Conference, and the following year, she received several awards for her charity work, including the Royal Scottish Geographical Society award and the Livingstone Medal. Lennox has also received The British Red Cross Services to Humanity Award, Save the Children "Amigo de los Niños" Award, and International Service Award for Global Defence of Human Rights.

Annie was married to Radha Raman from 1984 to 1985, and she wed music and movie producer Uri Fruchtmann in 1988. Lennox and Fruchtmann welcomed daughters, Lola and Tali in 1990 and 1993, respectively, and sadly, their son Daniel was stillborn in 1988. Annie and Uri divorced in 2000, and she went on to marry Mitch Besser in 2012.

In 2004, Lennox won an Academy Award and a Golden Globe for her song "Into the West," which was featured in "The Lord of the Rings: The Return of the King." She also won a Grammy for the song in 2005, and she earned Grammys for Best Rock Performance by a Duo or Group with Vocal for "Missionary Man" in 1987, Best Music Video – Long Form for "Diva" in 1993, and Best Female Pop Vocal Performance for "No More 'I Love You's" in 1996. Annie has won eight Brit Awards, an MTV Video Music Award, and four Ivor Novello Awards, and she was awarded the "Billboard" Century Award in 2002. She has earned honorary degrees from the Royal Scottish Academy of Music and Drama, University of Edinburgh, Open University of Scotland, Williams College, Berklee College of Music, and University of Essex.

In 2018, Annie paid $4.4 million for a home in the Nichols Canyon gated community in the Hollywood Hills, and a year later, she purchased another Hollywood Hills home for $1.6 million. The 1,631 square foot bungalow includes two bedrooms and one bathroom, while the Nichols Canyon home is 2,723 square feet and features three bedrooms, 3.5 baths, and an infinity pool. In 2013, Lennox put her 5,131 square foot London mansion on the market for £12 million, nearly three times what she paid for it. 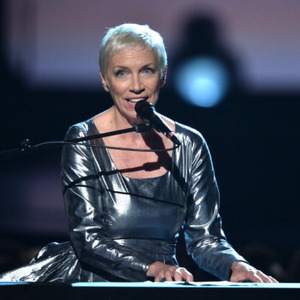