Ani DiFranco net worth: Ani DiFranco is a singer/songwriter, musician and poet who has a net worth of $5 million. Ani DiFranco earned fame after recording several studio albums such as "Not So Soft," "Little Plastic Castle," "Knuckle Down" and more. DiFranco expresses her views on politics and sexuality, as well as sexual abuse, poverty and more in her songs and poetry.

Early Life: Ani DiFranco was born Angela Marie DiFranco in Buffalo, New York on September 23, 1970, and started playing Beatles covers and busking with her guitar teacher, Michael Meldrum, at the age of nine. By 14, Ani was writing her own songs that she would play at bars and coffee houses throughout her teens. She graduated from the Buffalo Academy for Visual and Performing Arts high school at 16 and began taking classes at Buffalo State College. She had moved out of her mother's apartment as an emancipated minor when she was 15 and was living by herself.

Career: In 1989, at the age of 19  she founded the record company "Righteous Records," but soon discovered there was a religious record company with the same name, so DiFranco changed the name to "Righteous Babe Records," in 1994. In the winter of 1990, Ani released her first album, "Ani DiFranco," shortly after moving to New York City. In NYC, she took poetry  classes at The New School. DiFranco is known as one of the first recording artists to have her own independent label and actually do the recordings in her own home. Beginning in 1990, he went on to release an album every single year for 10 years, and nine more after that, as well as countless live albums. She toured extensively for the next fifteen years, making appearances at Canadian folk festivals and increasingly larger venues throughout the U.S, rooting her popularity in the North American folk scene. Throughout the mid-90s, she toured both solo and also as a duo with drummer Andy Stochanksy. In 1995, she participated in a concert at the Rock and Roll Hall of Fame to inaugurate the opening of the Woody Guthrie Archives. In 1996, bassist Sara Lee joined the touring group and their live rapport is showcased on the 1997 album "Living in Clip." DiFranco later released Lee's solo album on Righteous Babe titled "Make It Beautiful."

In 1999 Righteous Babe Records purchased Asbury Delaware United Methodist Church just as it was set to be demolished, and turned it into a concert hall. They named this new venue Babeville, and is the current home of the record company. DiFranco has performed with artists such as Prince, Maceo Parker, rapper Corey Parker and others. In 1998, Stochanksy left to pursue a solo career as singer-songwriter. DiFranco then recruited a new touring ensemble consisting of Jason Mercer, Julie Wolf, and Daren Hahn.

DiFranco continued to play ever-larger venues around the world throughout the '90s and attracted the international attention of the press, appearing on covers for magazines like Spin, Ms., and many others. She became a household name when her playful cover of "Wishin' and Hopin'" appeared under the opening titles of the 1998 film "My Best Friend's Wedding," That same year, she guest starred on an episode of Fox's "King of the Hill," voicing Peggy's feminist guitar teacher Emily. In 1999, her label Righteous Babe Records began releasing albums by several artists including Arto Lindsay, That One Guy, and Andrew Bird.

Since DiFranco's release of 2005's "Knuckle Down," her touring band and recordings have featured bass player Todd Sickafoose. In September 2007, Ani released her first introspective of her career, a two-disc compilation entitled "Canon." She then released a collection of poetry called "Verses." In September 2008, Ani released "Red Letter Year." On January 17, 2012, DiFranco released the album "Which Side Are You On" which includes collaborations with Pete Seeger and others. In 2017, she released her nineteenth album, "Binary." On May 7, 2019, DiFranco released a memoir via Viking Books entitled "No Walls and the Recurring Dream."

Activism: Ani has lent her voice and name to a broad range of social movements since the beginning of her career. She often plays benefit concerts, appears on benefit albums, and speaks at rallies for various platforms for social change. She participated in her first anti-war movement during the first Gulf War and played Pete Seeger's Clearwater Folk Festival in early 1993. In 1998, she was a featured performer in the Dead Man Walking benefit concert series with raised money for an anti-death penalty organization. She has been a long time supporter of the Southern Center for Human Rights. In 1999, she created her own non profit organization, the Righteous Babe Foundation, which, among many other causes, raises money for Buffalo's public school system. DiFranco also sits on the board for The Roots of Music, which provides free marching band instruction to children in the New Orleans area.

Accolades: DiFranco's albums have been met with critical acclaim over the years. She has a career album average of 72 on Metacritic. "Living in Clip," her double live album from 1998, went gold. Beginning in 2003, DiFranco was nominated four times in a row for Best Recording Package at the Grammy Awards. She won in 2004 for "Evolve." In July 2006, she received the Woman of Courage Award at the National Organization for Women Conference and Young Feminist Summit in Albany, New York. She was one of the first musicians to ever receive the award. In 2009, she received the Woody Guthrie Award for being a voice of positive social change.

Personal Life: DiFranco came out as bisexual in her early twenties and has written songs about love and sex with both men and women. In 1990, her song "Lost Woman Song" was inspired by her abortions at ages eighteen and twenty. She married Andrew Gilchrist, a sound engineer, in 1998, which ended in divorce in 2003. She married Mike Napolitano in 2009 and they share a daughter, Petah Lucia DiFranco Napolitano, who was born in January 2007. In April 2013, she had her second child, a son. They reside in the Bywater neighborhood of New Orleans, Louisiana. 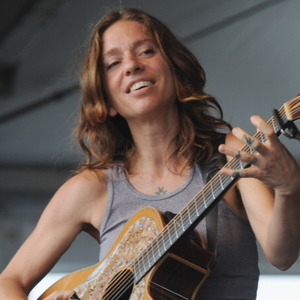