Angry Anderson net worth: Angry Anderson is an Australian singer-songwriter, television presenter, reporter, actor, and political activist who has a net worth of $3 million. Angry Anderson was born in Melbourne, Victoria, Australia in August 1947. Anderson has been the lead singer for the hard rock band Rose Tattoo since 1976.

As an actor he starred as Aaron "Agro" Smith in the television series Swift and Shift Couriers from 2008 to 2011. Anderson starred as Ironbar in the 1985 movie Mad Max Beyond Thunderdome. He has also starred in the movies Bullamakanka, Finding Joy, Fat Pizza, Housos vs. Authority, and Fat Pizza vs. Housos. Anderson has often been featured on the TV series documentary 20 to 1 and was a celebrity judge on the TV series Bogan Hunters in 2014. Anderson's ballad "Suddenly" reached #1 in Australia after being featured on the TV soap opera Neighbours. In 1993 he was made a Member of the Order of Australia for his role as a youth advocate. 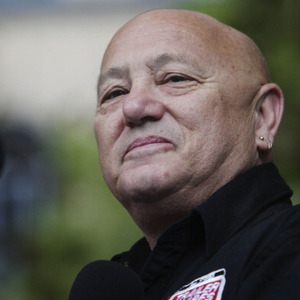