How much is Andy Williams Worth?

Andy Williams Net Worth: Andy Williams was an American popular music singer who had a net worth of $45 million. Andy Williams was born December 3, 1927 in Wall Lake, Iowa. In 1952, Williams launched his solo career. His initial No. 1 hits included Canadian Sunset, Butterfly and The Hawaiian Wedding Song. Williams then moved to Los Angeles to sign the biggest recording contract of that time with Columbia Records. By 1973, he had recorded more than 17 gold records, including Moon River, Love Story and Days of Wine and Roses. Williams' vocal technique and easy-listening sound made him one of the most popular singers of his era. His rendition of Moon River—written by Henry Mancini and Johnny Mercer—from the movie Breakfast at Tiffany's was released on his 1962 album entitled Moon River and Other Great Movie Themes. In 1961, Moon River won an Oscar for Best Original Song, following its film debut in Breakfast at Tiffany's (sung by Audrey Hepburn). Williams performed the popular song at the Oscars in 1962. That same year, Williams leveraged his popularity to debut his own TV variety series on NBC, The Andy Williams Show. The show won three Emmy Awards and lasted until 1971. In 1992, the legendary singer opened the Andy Williams Moon River Theater in Branson, Missouri, where he performed to sold-out crowds for years. In a surprise appearance at his theater in Branson in November of 2011, Williams confirmed he had been diagnosed with bladder cancer. After chemotherapy treatment in Houston, Texas, he and his wife moved to a rented home in Malibu, California in order to be closer to cancer specialists in the Los Angeles area. On September 25, 2012, Williams died of bladder cancer at the age of 84 at his home in Branson, Missouri. 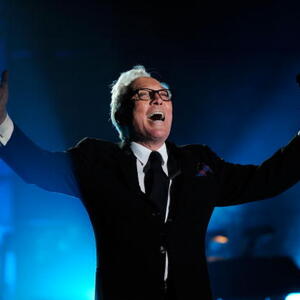