Alison Moyet  net worth: Alison Moyet is an English pop singer-songwriter who has a net worth of $18 million. Alison Moyet is famous for her bluesy voice that has resulted in 23 million albums being sold in the UK alone. She has also sold over a million singles. She has also had all seven of her studio albums and three compilation albums charted in the Top 40 UK Album Chart, including two of the albums reaching number one.

She is also responsible for achieving nine Top 30 singles and five Top 10 hits on the UK Singles Chart. Alison was born in the small Essex town of Billericay, England on June 18, 1961, her father was French and her Mother was English. She dropped out of school at the age of 16, and began working as a shop assistant and trained as a piano tuner. During the late 1970s and early 1980s she was involved in a number of punk rock, pub rock and blues bands in the South East Essex area. Bands like the Vandals, the Screamin'Ab Dabs, the Vicars and the Little Roosters (the latter featuring Gary Lammin formerly of Cock Sparrer). In 1982 at the age of 21 Moyet formed the electropop duo Yazoo, this was the beginning of her mainstream pop career. Moyet released her debut solo album Alf (titled after her punk-era nickname) in 1984. In the London West End production of the musical Chicago in 2001, is where Alison made her stage debut. She played the part of Matron 'Mama' Morton, and the play was originally planned to be a short run, it was extended to six months. Following that performance she appeared in the play Smaller, which undertook a regional tour before a stint at London's Lyric Theatre. She is currently married to teaching assistant David Ballard, she has three children. 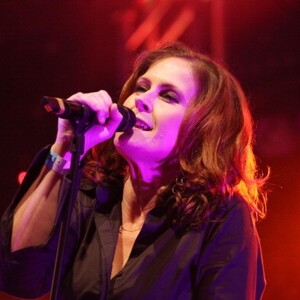