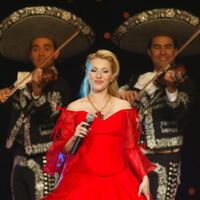 Alicia Villarreal Net Worth: Alicia Villarreal is a Mexican-Latin singer who has a net worth of $12 million. Martha Alicia Villarreal Esparza (aka Alicia Villarreal) was born August 31, 1971 in Monterrey, Nuevo León, Mexico. After her first performance as a youth at a church fundraiser, Villarreal participated in different bands in her native city, including the successful band Grupo Límite. Alicia Villarreal's first solo album, Soy Lo Prohibido, was produced by Homero Patón and released by the Latin division in 2001. The album Orgullo de Mujer cracked the Billboard 200 and earned Villarreal a Grammy nomination. In 2004, she released her second solo album, Cuando el Corazón se Cruza, produced by her husband Cruz Martínez. The married couple also wrote several of the songs from the album together. In 2006, she released her third solo album, Orgullo De Mujer, along with the lead single Insensible a Ti. The single was the theme song for the telenovela Duelo de Pasiones, in which Villarreal also made her acting debut in the role of Raquel. After a nearly four-year hiatus, Villarreal announced she was in the studio recording her 4th solo album. La Jefa was released June 23, 2009 with Caso Perdido as lead single. The album debuted at No. 1 on Billboard's Regional Mexican Albums and overall at No. 4 on its Latin Albums chart. Caso Perdido, as a single, did not achieve the same success as prior single releases. Alicia Villarreal married her first husband, record producer Ezequiel Cuevas, in 1991 and they divorced in 1993. She married Arturo Carmona on December 16, 1998 and they had a daughter, Melenie Aidée Carmona Villarreal, on April 10, 1999. The couple divorced in 2001. On October 10, 2009 Alicia Villarreal's brother José Víctor Villarreal Esparza, then 36 years old, was killed in a car accident in Monterrey, Nuevo León, Mexico.