Alicia Machado net worth: Alicia Machado is a Venezuelan actress, television personality, singer, and beauty queen who has a net worth of $4 million. Alicia Machado was born in Maracay, Venezuela in December 1976. She was crowned Miss Universe in 1996 and was the fourth woman from Venezuela to earn the title. Machado also won the titles of Miss Yaracuy 1995 and Miss Venezuela 1995.

As an actress she starred as Diana Rodriguez in the television series El Pantera in 2007. Machado starred as Karen in the TV series Hasta que el dinero nos separe in 2009. In 2015 she starred as Claudia in the series Unforgiveable. She was on the cover of the Mexican edition of Playboy magazine in 2006 and was the only Miss Universe appear nude in the magazine. Machado also released her self-titled debut studio album in 2004 and the album Si se Acabara el Mundo in 2010. In 2016, Alicia Machado gained international attention after being mentioned by Hillary Clinton at tlhe first Presidential debate of 2016. Clinton used Machado as an example to highlight Donald Trump's sexism. Reportedly when Machado was Miss Universe, a pageant that was formerly owned by Trump, the real estate tycoon made racist and sexist remarks about her including calling her "Ms Piggy" and "Ms Housekeeping". 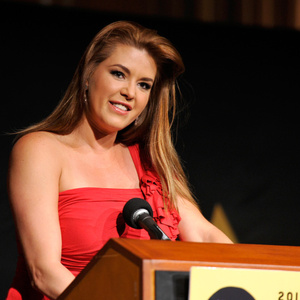