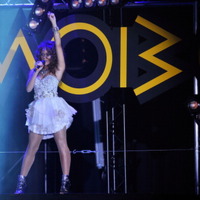 Alexis Jordan Net Worth: Alexis Jordan is an American singer and actress who has a net worth of $6 million. She was born on April 7, 1992 in Columbia to a Puerto Rican father and European mother. She was only a 3rd grade student when she first started writing songs. At eleven, she and her family moved to California where she would pursue a career in the arts. One year later, she was selected for an opening performance for "Smokey Robinson" at a concert. But it was the talent show "America Got Talent" that provided Jordan with the first real step to climb the ladder of success. She contested on the first season of the show in 2006 and reached the semis finals. Upon her elimination, she moved to Atlanta with her family. There, she started uploading cover songs on YouTube and attracted millions of online fans and viewers. That's how she eventually caught the eye of the production team of "Stargate". In 2011 her first self-titled music album was released. It spawned the single "Happiness", which was a No.1 single on the Hot Dance Club Songs rating. In 2012, she made her first tour to United Kingdom, performing in London, Birmingham and Manchester. One year later, her song "Acid Rain" was leaked online announcing her next studio effort which is yet to be released.