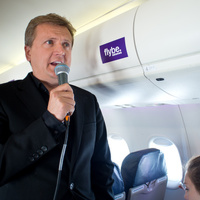 Aled Jones Net Worth: Aled Jones is a Welsh singer who has a net worth of $5 million. Aled Jones was born in Bangor, Wales in December 1970. Aled Jones is best known for his television work with the BBC and ITV and his radio work with BBC Radio 2. At nine years old he joined a church choir and he was later signed by local record company Sain. He won the Cerdd Dant solo competitions for competitors under 12 at the Urdd Eisteddford in 1982. He became famous for his cover of the song "Walking in the Air" from the 1982 film The Snowman. He was the focus of a 1985 Emmy Award winning BBC Omnibus documentary called The Treble. His voice broke at 16 after he had recorded 16 albums and sold more than six million copies. Jones sung for Pope John Paul II, the Queen, and the Prince and Princess of Wales. His biography Walking on Air was published in 1986. His debut studio album Diolch a Chan was released in 1983 and his latest, Forever, in 2011. "Walking in the Air" reached #5 and "Little Drummer Boy" (with Terry Wogan) reached #3 in the UK. Jones joined ITV Breakfast's Daybreak as a presenter in 2012 but left in 2014 for the ITV show Weekend.