Adam Ant Net Worth: Adam Ant is a British musician who has a net worth of $10 million dollars. Adam Ant rose to prominence as the front man of post-punk group "Adam and the Ants", after which he embarked on a successful solo career. Born Stuart Leslie on Goddard on November 3, 1954 in Marylebone, London, he was the only child of Leslie Goddard and Betty Kathleen Smith.

When Adam was seven years old, his parents were getting divorced and he went through a tough late childhood. He only found solace learning with his teacher Joanna Saloman, who would help him recognize his artistic capabilities for the first time. Goddard studied graphic design at the Hornsey College of Art when he first dabbled in music. Later on, he would even drop out of college to play bass guitar with the band "Bazooka Joe. Impressed with a Sex Pistols performance, he decided to leave the band and form his own combo. Thus, he formed B-Sides. Unfortunately, he developed anorexia and had to be hospitalized for a while. But upon his recovery, he reconnected with fellow former B-Sides Lester Square and Andy Warren. The three of them united with drummer Paul Flanagan, to form "Adam and the Ants" in 1977. They remained active until 1982, leaving behind three studio albums: Dirk Wears White Sox (1979), Kings of the Wild Frontier (1980) and Prince Charming (1981). Later on, he performed as a solo artist, scoring 10 UK top ten hits and three No. 1s from 1980 to 1983. He enjoyed a massive popularity in the States and was once even voted the sexiest man in America by MTV's viewers. Aside from music, Adam Ant has also served as an actor, appearing in over two dozen films and television episodes from 1985 to 2003. 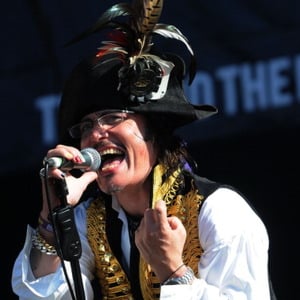