Aaron Barrett net worth: Aaron Barrett is an American singer, songwriter, and musician who has a net worth of $1 million. Aaron Barrett was born in August 1974. He is best known for being the lead singer, songwriter, and lead guitarist for the ska-punk band Reel Big Fish. He has also played in the bands The Scholars and The Forces of Evil. Reel Big Fish formed in 1991 and released their debut studio album Everything Sucks in 1995. Their album Turn the Radio Off was released in 1996 and was certified Gold in the US where it reached #57. The band released the albums Why Do They Rock So Hard? in 1998, Cheer Up! in 2002, and We're Not Happy 'til You're Not Happy in 2005. Their album Monkeys for Nothin' and the Chimps for Free was released in 2007 and reached #13 on the US Indie chart. Reel Big Fish released the albums Fame, Fortune and Fornication in 2009 and Candy Coated Fury in 2012. Their best known single is "Sell Out" which reached #10 on the US Modern Rock chart. 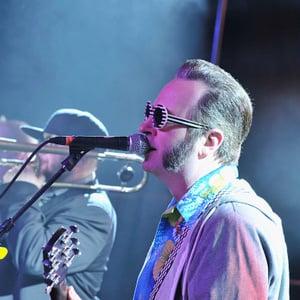