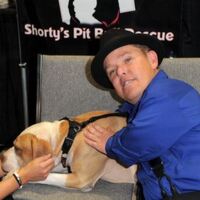 Shorty Rossi is an American reality television star who has a net worth of $4 million. Shorty Rossi has earned his net worth as the star of the American television series docudrama Pit Boss which airs on the Animal Planet Network, which follows the life of the owner of Shorty's Rescue. This organization is owned by Shorty Rossi and was set up for the rescue of Pit Bull dogs. The series debuted on January 16, 2010 on the Animal Planet network; Rossi is also the talent manager as well as the owner of Shortywood Productions, which is a talent company that works with dwarfs who are part of the entertainment industry. Shorty was born on February 10, 1969 in Los Angeles, California Rossi's parents were dwarfs. He graduated from Fremont High School in 1987; he was also member of the street gang known as the blood gang. He was involved in a gang-related shooting that led to his conviction for numerous felonies which included attempted murder and assault with a deadly weapon. He first went to the California Youth Authority and he was later sentenced to Folsom State Prison for 10 years, 10 months and 10 days. One of his first jobs in show business was starring as "Alvin:" in an Alvin and the Chipmunks stage show. This where he learned he could make good money in the movie industry as a dwarf. Later he appeared in many commercials as well as movies such as The Grinch and, The Kid. He also appeared on several television shows as well as many theater plays.