Scott Pelley Net Worth: Scott Pelley is an American television journalist and news anchor who has a net worth of $16 million. Scott Pelley was born July 28, 1957 in San Antonio, Texas. He is best known as the current anchor and managing editor of the CBS Evening News and a correspondent for the CBS news magazine 60 Minutes.

Prior to his 60 Minutes position, Pelley was a correspondent for the 60 Minutes II program and served as CBS News's chief White House correspondent. His first job in journalism was at the age of 15 as a copyboy for the Lubbock Avalanche-Journal. He majored in journalism at Texas Tech University. He moved on to KXAS-TV in Fort Worth in 1978 then jumped to WFAA-TV in Dallas in 1982, remaining for seven years. In 1985, Pelley's reporting on Guatemalan refugees living in remote jungles of Mexico caught the attention of executives at CBS News, but it would be another four years before Pelley would move to CBS. Pelley became the anchor of the CBS Evening News on June 6, 2011, succeeding anchor Katie Couric. Pelley's news-related awards are many-some of which were earned collectively: Reporting on child slavery in India earned 60 Minutes II the Investigative Reporters and Editors Award (1999); Pelley team's reporting on the deaths of civilians during a Marine engagement in Haditha, Iraq, won the George Foster Peabody Award (2007); Pelley's team won its second George Foster Peabody Award for a report on the medical relief organization Remote Area Medical (2009); Pelley was named to Salon.com's Men on Top list alongside Conan O'Brien, Tom Hardy and Mark Ronson (2010); Pelley's team won the Alfred I. duPont-Columbia University Award for an investigation into the Deepwater Horizon disaster (2011); Pelley's team of producers, photographers and editors won its third George Foster Peabody Award for an investigation of a fraudulent medical study at Duke University (2013). Also in 2013, Pelley was named an Outstanding Alumnus of Texas Tech University, the highest honor bestowed by Texas Tech Alumni Association.

He was inducted into the Texas Tech University College of Media and Communication Hall of Fame in 2006; Scott Pelley currently serves on the professional advisory board of the university's College of Media and Communication. In 2014, CBS News was recognized with the Alfred I. duPont-Columbia University Award for its coverage of the mass murder at Sandy Hook Elementary School in Newtown, CT. Overall, Pelley has been the correspondent on teams that have won 25 national Emmy Awards from the National Academy of Television Arts and Sciences. 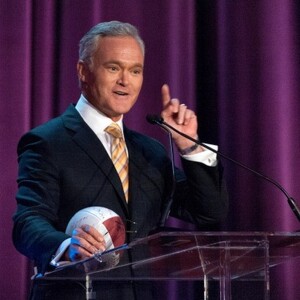