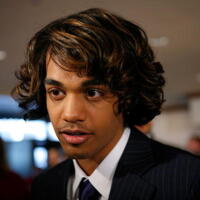 Sanjaya Malakar Net Worth: Sanjaya Malakar is an American singer who has a net worth of $300 thousand dollars. Born in Federal Way, Washington, in 1989, Sanjaya Malakar rose to fame on the sixth season of reality singing competition "American Idol". He began singing at a young age and performed with the Hawaii Children's Theater Group and was a member of a gospel choir. He left high school early to pursue his music career. He and his sister, Shyamali, auditioned for "American Idol" in 2006 in Seattle. The siblings made it through to Hollywood, though Shyamali was eventually cut. Malakar finished in seventh place. While on the show, he sang songs in a variety of genres, including "Something to Talk About", Cheek to Cheek", "Bathwater", "You Really Got Me", and "Some Kind of Wonderful". Malakar became the most popular contestant of the season and Simon Cowell later remarked that he would've quit the program had Malakar been crowned the next American Idol. He was part of the 2007 American Idol Concert Tour, singing "The Way You Make Me Feel". Malakar was a guest of "People" magazine at the White House Correspondents' Association Dinner and was featured in several different magazines following his "Idol" elimination. He won Best TV Reality Star at the 2007 Teen Choice Awards. He has appeared on numerous TV shows, including "The Tonight Show with Jay Leno", "Live with Regis and Kelly", "The Ellen DeGeneres Show", and "Jimmy Kimmel Live". Malakar starred on the second season of "I'm a Celebrity…Get Me Out of Here!" alongside Spencer Pratt, Heidi Montag and Stephen Baldwin. He currently works in New York.