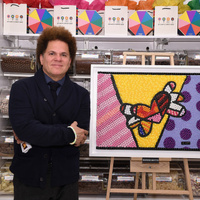 Romero Britto net worth: Romero Britto is a Brazilian pop artist, sculptor, painter and serigrapher who has a net worth of $20 million. Romero Britto was born on October 6, 1963 in Recife, Brazil. Romero has achieved a high level of visibility for his work during his career. His big break came just after Britto arrived in the United States from his native Brazil. The founder of Absolut Vodka's famous "Absolut Art" ad campaign, Michael Roux, happened upon one of Britto's art galleries in Coconut Grove, FL and instantly asked Britto to redesign the Absolut Vodka bottle for an upcoming ad campaign. From there, Britto got more and more work commissioned by various companies looking to put an artistic spin on their public images. These entities include such familiar companies and brands as Disney, Pepsi, Royal Caribbean Cruises, and even the United Nations. He has also used his talents to more charitable purposes, designing the logo for the relief effort "Save Haiti Saturday" that took place on January 16, 2010 that raised money for the earthquake in Haiti. His work can also be seen in places of high visibility, many of which are in his hometown since 1989, Miami. What artist wouldn't want to have his work seen by so many people?