How much is Roger Ebert Worth?

Roger Ebert Net Worth: Roger Ebert was an American film critic, journalist and screenwriter who had a net worth of $9 million. Roger Ebert was born June 18, 1942 in Urbana, Illinois. His career began in 1966, writing for the Chicago Sun-Times' Sunday magazine. In 1975, he became the first film critic to win a Pulitzer Prize. That same year Ebert teamed up with fellow movie critic Gene Siskel on a television show where they debated the quality of the latest films. The show became a hit and Siskel and Ebert became household names. They worked together until 1999 when Siskel passed away due to complications of a surgery involving a cancerous brain tumor. In early 2002, Ebert was diagnosed with papillary thyroid cancer which was successfully removed. In 2003, he underwent surgery for cancer in his salivary gland, which was followed up by radiation treatment. He was again afflicted with cancer in 2006. In June of that year, he had surgery to remove cancerous tissue near his right jaw and just one week later he had a life-threatening complication when his carotid artery burst near the surgery site. He was confined to bed rest and was unable to speak, eat, or drink for a period of time, necessitating the use of a feeding tube. Ebert made his first public appearance since mid-2006 at Ebertfest on April 25, 2007. He was unable to speak, instead communicating through his wife. In March 2010, his health trials and new computerized voice were featured on The Oprah Winfrey Show. Ebert later proposed a test to determine the realism of a synthesized voice. In December 2012, Ebert was hospitalized with a fractured hip. On April 2, 2013, he announced that he would be taking a "leave of presence" from his duties because the hip fracture was determined to be cancerous and would require radiation treatment. On April 4, 2013, Roger Ebert lost his brave fight at the age of 70 when he passed away in Chicago as he was preparing to come home from the hospital. At the April 2014 Ebertfest, the Pulitzer Prize-winner was honored with a life-sized bronze statue outside the Virginia Theatre in Champaign, Illinois. 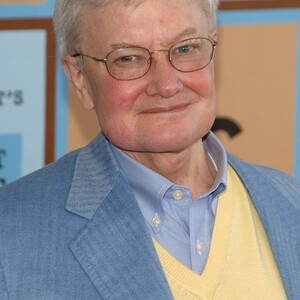