What was Rodney King's Net Worth?

Rodney King was an American who became famous after an LAPD police brutality case. Rodney King had a net worth of $250 thousand. The police beating of King occurred on March 3, 1991. The incident was video taped by George Holliday, an innocent bystander. The video showed officers repeatedly hit king with their batons. Other LAPD officers who were present just stood around and watched and no one stepped in to stop this brutal beating. Later the four officers were tried in a state court, three of them were acquitted and no verdict was reached for the four one. The results of this trail are what caused the 1992 Los Angeles riots. During a federal trial for civil rights violations two of the four LAPD officers were found guilty and sent to prison, however the other two were acquitted of all charges.

As a result of the civil rights trail King was awarded a $3.8 million dollar settlement, he used some of the funds to start his own Hip-Hop music label titled Straight Alta-Pazz Recording Company.

King was born on April 2, 1965 in Sacramento, California. His parents were Ronald and Odessa King and he grew up with his four siblings in Altadena, California. He attended John Muir High School and particularly enjoyed his social studies class. In 1984, when King was 19, his father died at the age of 42.

On March 3, 1991, King and two of his friends were driving home after having spent the evening watching basketball and drinking at a friend's house. A police car began pursuit when they noticed King was speeding, which led to an 8-mile high speed chase before police officers were able to corner King's car. By that time, five officers were on the scene – Stacey Koon, Laurence Powell, Timothy Wind, Theodore Briseno, and Rolando Solano.

A nearby resident, George Holliday, happened to be filming the scene with his camcorder from his apartment balcony. Holliday turned the resulting footage over to a local television station and it became a media sensation. It showed the officers relentlessly beating King with batons with Officer Stacey Koon, the ranking officer on the scene, directing the arrest. The officers later claimed that King was resisting arrest but the footage and onlookers say otherwise.

King was taken to the hospital after his arrest where he suffered multiple injuries. Holliday's video surfaced two days later and led to the Los Angeles County District Attorney charging four officers, including one sergeant, with assault and use of excessive force. The trial was held in Ventura County and after seven days of jury deliberations, the four officers were acquitted of all assault charges and three of the four were acquitted of using excessive force. 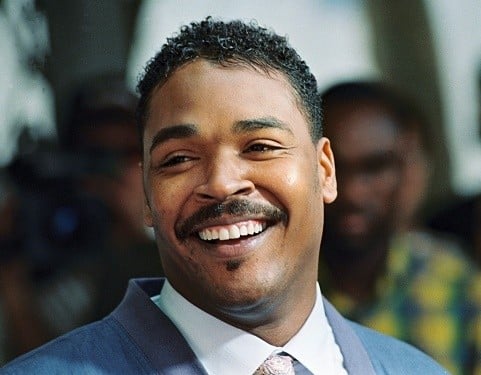 Within hours of the acquittal, the 1992 Los Angeles riots began and lasted for six days. The LA African-American community was outraged over the outcome and smaller riots occurred in other U.S. cities. By the end of the riots, over 60 people were left dead, more than 2,000 injured, and over 7,000 fires set. King appeared on television during the riots, making the now infamous plea for everyone to "just get along."

After the acquittals, the United States Department of Justice sought indictments of the police officers for violations of King's civil rights. Their trial began in February of 1993. Officers Stacey Koon and Laurence Powell were found guilty and sentenced to 30 months in jail, while the other two were acquitted, though they were later dismissed from the LAPD. King then sued the city of Los Angeles and the jury awarded him $3.8 million in damages as well as $1.7 million in attorney fees.

In April of 2012, just a few months before his death, King published his memoir, "The Riot Within: My Journey from Rebellion to Redemption." The book describes his youth and his own account of the 1991 beating and subsequent trials.

King was married to Daneta Lyles from 1985 until 1988. The two had a daughter together. He then married Crystal Waters in 1989, with whom he also had a daughter with. Prior to his marriages, he had also had a daughter with girlfriend Carmen Simpson. In the two years before his death, he was in a relationship with Cynthia Kelley, who had been a juror in the civil suit he brought against the City of Los Angeles. They confirmed their engagement in 2010.

King struggled with alcohol and drug abuse throughout his life. After the incident in 1991, he was arrested several times, with the charge usually involving driving while intoxicated or under the influence. He was also charged with forms of domestic abuse against his partner, Cynthia Kelley. In an effort to get clean, he checked into the Pasadena Recovery Center in California and joined the cast of the second season of "Celebrity Rehab with Dr. Drew" in 2008. He appeared in a number of follow-up productions, including as an alumni speaking on a panel for the third season cast when he had reached 11 months of sobriety. However, at some point in the last years of his life, he began drinking again.

On Father's Day in 2012, King's partner, Cynthia, found King dead in the bottom of his swimming pool. Strangely, it was 28 years to the day that King's father had been found dead in his bathtub, with both causes of death being accidental drowning. King's autopsy report revealed that he did have drugs and alcohol in his system which likely combined with his pre-existing heart condition to cause a cardiac arrhythmia, which left him incapacitated in the water and led to his drowning.

King's funeral was attended by many, with Reverend Al Sharpton delivering the eulogy. He is interred at Forest Lawn Memorial Park in Los Angeles. King has since become a symbol of police brutality and the story of his brutal beating has been addressed in various artforms and media like the 1997 film, "Riot," the 1998 film, "American History X," and the one-man play by Roger Guenver  Smith called, "Rodney King."

His daughter, Lora King, has started the Rodney King Foundation on behalf of her father.