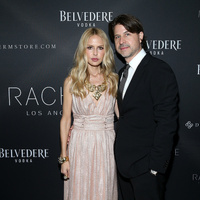 Rodger Berman net worth and salary: Rodger Berman is an American businessman who has a net worth of $5 million. Rodger Berman is probably most famous for being the president of Rachel Zoe Inc. Berman has earned his net worth working as an Investment Banker and the co-founder and president of Recognition Media, a leading owner and producer of internet media and advertising industry awards, programs and events including the Webby Awards and Internet Week. He just recently joined forces with his wife, Rachel Zoe. Rodger has taken over the business side of her company. He handles all finance, legal and employee oversight. They are in the process of expanding the Rachel Zoe brand name. Rodger works in conjunction with Zoe to set the overall direction and strategy of the brand. He is originally from New York and he earned his B.A. and M.B.A. at George Washington University. He met his wife Rachel in the summer of 1991, she was 19, and he was 22. When he met Zoe he was working as a waiter in Washington, D.C. and she was working as a restaurant hostess. Rodger and Rachel were married on February 14, 1996 and were married well before she became famous. They have grown together and remained each other's support and best friend. They currently live in Los Angeles, California and have been together for about 19 years. They have a son named Skyler Morrison Berman who was born on March 22, 2011.