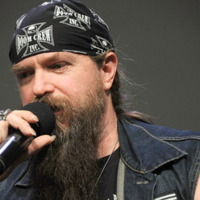 Zakk Wylde net worth: Zakk Wylde is an American musician, songwriter, multi-instrumentalist and occasional actor who has a net worth of $16 million. Zakk Wylde has earned his net worth through career as guitarist for Ozzie Osbourne, as lead guitarist and singer for Pride & Glory, as well as founder of Black Label Society Heavy Metal Band. He's also performed as a solo artist and actor of television and films. Born Jeffrey Phillip Wielandt on January 14, 1967 in Bayonne, New Jersey, he is best known as the guitarist for Ozzy Osbourne and the founder of the heavy metal band Black Label Society. His signature bull's-eye design appears on many of his guitars. At the age of 8 he started playing guitar and by the age of 14 was working at Silverton Music in Toms River, New Jersey. In 1987, Wylde sent a demo tape to Ozzy Osbourne and was hired to replace musician Jake E. Lee, who replaced Brad Gillis (Night Ranger), who replaced the deceased Randy Rhoads. Wylde cites Randy Rhoads as his foremost guitar-playing and stagecraft influence. He did, however, leave Ozzy's band between 1995 and 2001, returning approximately 5 years later to play on Ozzy's album Black Rain before launching his career with the band Black Label Society. Wylde once lost one of his signature guitars off the back of an equipment-transporting truck as he was traveling between gigs in Texas. Reward offers and initial attempts to find the guitar proved futile until a number of years later when a fan bought it at a Dallas pawn shop and recognized the initials Z.W.—Wylde bartered with the fan and exchanged two other Les Pauls for his long-lost guitar. Wylde and his wife Barbaranne have four children: Hayley Rae, Hendrix, Sabbath and Jesse, who is godson to Ozzy Osbourne.