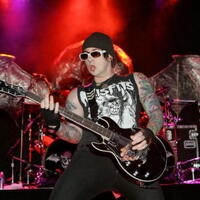 Zacky Vengeance Net Worth: Zacky Vengeance is the rhythm guitarist, backing vocalist, and founding member for the American heavy metal band Avenged Sevenfold who has a net worth of $18 million dollars. Zacky Vengeance was born Zachary James Baker on December 11, 1981 in Olympia, Washington and grew up in Huntington Beach, California where he attended Huntington Beach High School and formed Avenged Sevenfold there with M. Shadows and The Rev. Before Avenged Sevenfold, his first band was a crust punk band called Society Down. After Society Down, he formed a punk band called MPA*, which stands for Mad Porno Action. He implied that they were both unsuccessful. Baker came up with his stage name Zacky Vengeance because he wanted to get back at all the people from his youth who doubted his potential. He also came up with Jonathan Seward's stage name Johnny Christ, saying it suited him. Vengeance was also responsible for the creation of the shortned symbol for the band: A7X. He is of Italian and German descent. Despite playing the guitar left handed, Vengeance recalls the first guitar he learned to play on was actually a right-handed his parents had bought him for his thirteenth birthday. He learned by playing upside-down, watching his favorite bands and other people he knew who played, and practiced as much as he could. He would also read each edition of Guitar World cover to cover, learning the tabs of the songs published there and watching the professionals perform them until he could play them.