Wynton Marsalis Net Worth: Wynston Marsalis is an American musician and teacher who has a net worth of $15 million dollars. Born in New Orleans, Louisiana, in 1961, Wynton Marsalis loved music from a young age. He appeared in the Fairview Baptist Church band by the time he was eight, and was with the New Orleans Philharmonic before his 15th birthday.

Marsalis' musical accomplishments during high school include appearances with the New Orleans Symphony, the New Orleans Community Concert Band, and the New Orleans Symphony Brass Quintet. He studied at Tanglewood's Berkshire Music Center and was considered the school's best brass student. In the late '70s, he studied at Juilliard in New York City. Soon after, he landed with the band the Jazz Messengers. In 1987, he co-founded Lincoln Center's jazz program. He was part of a 26-week special on "Making the Music" on NPR and "Marsalis on Music" on PBS. Marsalis is the author of five books, including "Jazz in the Bittersweet Blues of Life" and "Moving to Higher Ground: How Jazz Can Change Your Life". He has been part of close to 100 different albums. The nine-time Grammy Award winner is the only person to ever win awards for both classic and jazz albums. He was considered one of the most influential people in America by "Time" in 1996. Marsalis became a UN Messenger of Peace in 2001 and is the winner of various international awards, including becoming an honorary member of the Royal Academy of Music. In 1997, he earned the Pulitzer Prize for Music for "Blood on the Fields". Marsalis served as a "CBS This Morning" cultural correspondent and serves as the Artistic Director of Jazz at Lincoln Center. 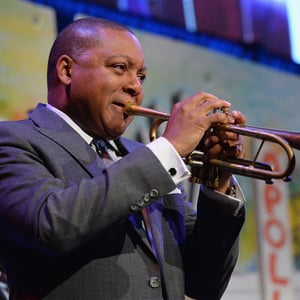