Wes Scantlin Net Worth: Wes Scantlin is an American guitarist, lead singer and songwriter who has a net worth of $500 thousand dollars. Wes Scantlin was born June 9, 1972 in Kansas City, Missouri. He is the only remaining founding member of the American post-grunge band Puddle of Mudd and cites his influences as acts such as AC/DC, Aerosmith, Nirvana, Alice in Chain, and Van Halen.

Wes Scantlin has been guitarist and lead vocalist for rock band Puddle of Mudd since they released their debut album, Stuck. They released their next album Abrasive in 1997 and four years later, with the addition of three new members, Come Clean was released in 2001. In 2003, the band released Life on Display, followed by the album Famous in 2007. Puddle of Mudd released Vol. 4: Songs in the Key of Love & Hate in 2009. The first single off the album was Spaceship. Their most famous song to date is Blurry, which hit No. 8 in the U.K. Scantlin sometimes tours with Alice in Chains' guitarist Jerry Cantrell, playing acoustic Alice in Chains songs. He was also one of the musicians who participated in Alice in Chains reunion tsunami benefit show. Scantlin was one of the many artists who worked with Carlos Santana on his album, All That I Am, specifically on the song Just Feel Better. The song was recorded with Scantlin and Steven Tyler; however, Tyler's version appears on the album. Scantlin has been ranked in the Top 100 Heavy Metal Vocalists by Hit Parader (No. 96). His career has also been peppered with legal troubles, beginning with a domestic violence arrest in 2002 in California then a disorderly conduct arrest in Ohio; a brush with trouble in 2007 when he was banned from Graceland for swimming in the off-limits pool while touring the facilities; trouble with the IRS in 2012; an arrest for being intoxicated on a flight from Boston to Los Angeles (causing the airline to have to land in Austin); a 2013 arrest on yet another domestic violence incident and a 2014 incident in which Scantlin had an on-stage meltdown during a show in Dallas, Texas-in which he threw a microphone and beer at the audience. 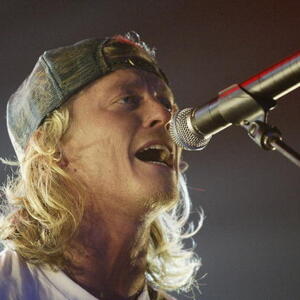