How much is Warren Haynes Worth?

Warren Haynes net worth: Warren Haynes is an American rock and blues guitarist, vocalist and songwriter who has a net worth of $13 million. Warren Haynes began to play the guitar at age 12 and at age of 14 he was playing parties and sitting in with the house band at a local pizza parlor. He is a generation-spanning guitar hero. Warren wasn't out of grade school when some of his best-known collaborators were at the peak of their fame, but he's earned a powerful reputation for his fiery guitar work. He developed a taste for soul and R&B at an early age from older brothers who listened to Otis Redding, Wilson Pickett, and Smokey Robinson. His primary guitar is a Gibson Les Paul '58 Reissue Electric Guitar. Often playing Gibson Firebird and Gibson ES-335 models as well as the Les Paul models, he has referred to himself as a "Gibson man". In 1980 he joined David Allan Coe's touring and recording band. In 1987 he got a call to perform backup vocals on a studio album by Dickey Betts, along with Dennis Robbins. In 1988 Haynes was invited to join the band of former Allman Brothers guitarist Dickey Betts. In 1989, Betts and Gregg Allman re-formed the Allman Brothers Band, and Haynes was brought aboard as their guitarist. In 1994, Haynes broke up the Warren Haynes Band and formed Gov't Mule, a power trio featuring Allman Brothers bassist Allen Woody and drummer Matt Abts. In 2003 and 2004, Warren released two solo acoustic albums, The Lone EP, a collection of live performances and Live from Bonnaroo which documents his solo performance at the 2003 Bonnaroo Music Festival. In addition Haynes founded and manages Evil Teen Records. He was born in Asheville, North Carolina on April 9, 1960. 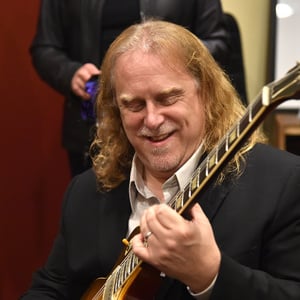