Vince Clarke net worth: Vince Clarke is an English musician and songwriter who has a net worth of $30 million. Vince Clarke was born in South Woodford, England, United Kingdom in July 1960. Clarke is best known for being the main composer and musician for the band Erasure. He has also been a part of the bands Depeche Mode, The Assembly, and Yazoo.

He studied violin and piano but became interested in synthpop. His first band was No Romance in China in the late 1970s. After that Clarke formed the bands French Look and Composition of Sound. That band was renamed Depeche Mode and Clarke was only a member from 1980 to 1982 and recorded on their first two albums. He teamed up with singer Alison Moyet to form the synthpop band Yazoo which released two albums including the 1983 album You and Me Both which hit #1 in the UK and New Zealand. Yazoo had four singles reach #1 on the US Dance charts. In 1983 Clarke formed The Assembly which never put out a full album until it was released in 1999. After putting an ad in the paper he formed Erasure in 1985. Erasure has released a total of 16 albums and consists of Clarke and singer Andy Bell. The band had 24 consecutive Top 40 hits in the UK from 1986 to 2007 and had the singles "A Little Respect", "Always", and "Chains of Love" make the Top 20 in the US. They won the Brit Award for Best British Group in 1989 and has sold more than 25 million albums worldwide. Clarke was awarded an Outstanding Song Collection prize during the Ivor Novello Awards in 2009. 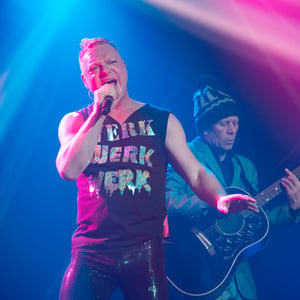