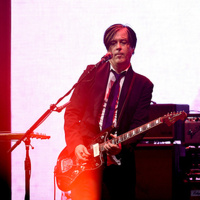 Troy Van Leeuwen Net Worth: Troy Van Leeuwen is an American musician and producer who has a net worth of $8 million dollars. Born January 5, 1970 in Los Angeles, California, Van Leeuwen's dad would often play early rock and roll records such as Chuck Berry. Van Leeuwen's first big influence in learning how to play rock came through listening to Led Zeppelin records. Playing drums initially, he sought to imitate Zeppelin drummer, John Bonham, but later switched to guitar and discovered that he had an aptitude for it. Van Leeuwen cites Jimmy Page as a big influence. Soon he was playing in various local bands such as Jester, 60 Cycle and later Failure. During this time, Van Leeuwen also worked as a session musician for various bands and met guitarist Billy Howerdel, who later recruited Van Leeuwen to play guitar in the alternative rock supergroup A Perfect Circle. The band's debut album Mer De Noms became the highest ever debut for a rock band, selling 188,000 copies in its first week. After recording three tracks on A Perfect Circle's second album, Van Leeuwen auditioned for Josh Homme's Queens of the Stone Age and was welcomed into the band as their second guitar player. In addition to guitar, Van Leeuwen was also required to play lap steel and keyboards. Since joining the band in 2002, Van Leeuwen has played on three studio albums: Lullabies to Paralyze in 2005, Era Vulgaris in 2007 and …Like Clockwork in 2013. He has also recorded with various band members' side projects such as The Desert Sessions, Mondo Generator, Eagles of Death Metal and The Gutter Twins. He created his first side project Enemy in 2005 and then moved to a new side project, Sweethead.