Tracii Guns net worth: Tracii Guns is an American guitarist who has a net worth of $500 thousand dollars. Tracii Guns was born in Los Angeles, California, and formed his first band, L.A. Guns, in the early 80s. The original lineup of the group featured Axl Rose, Ole Beich, and Rob Gardner.

Over the course of the next 30 years, the band would feature a revolving lineup made up of some of rock's most successful musicians. In 1985, Tracii Gun and Axl Rose created the group, Guns 'n' Roses, a combination of their two separate bands, Axl's Hollywood Rose and Tracii Guns', L.A. Guns. The group toured together briefly, but broke up quickly, and Axl's band, now known as Guns 'n' Roses went one way, and L.A. Guns went another. Tracii Guns has released 12 albums with L.A. Guns. He also formed the super group, Contraband, and released one album, and a second group called, Brides of Destruction, with whom he released two albums. 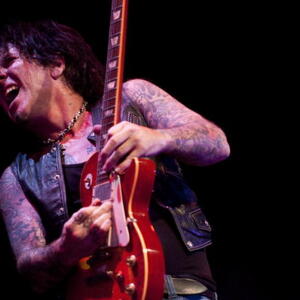