Tony Kanal net worth: Tony Kanal is a British-American musician, record producer and songwriter who has a net worth of $25 million dollars. Born in Kingsbury, London, England, Tony Kanal lived all over when he was a child, staying briefly in London, Canada, and Indiana. When he was in elementary school, his family finally settled in Anaheim, California, where they opened a gift shop.

His father suggested he play an instrument, and he started with the saxophone, but later shifted to bass. This led to him joining the group, No Doubt, as their bassist. At the urging of his parents, he attended California State University-Fullerton, where he majored in psychology, while also pursuing his music career. In addition to his work with No Doubt, he has also produced tracks for the soundtrack of "50 First Dates", as well as writing and producing tracks for Gwen Stefani's first solo album, Pink's album, "Funhouse", and Shontelle's album, "No Gravity". He and his girlfriend, actress Erin Lokitz, recently had a baby girl. 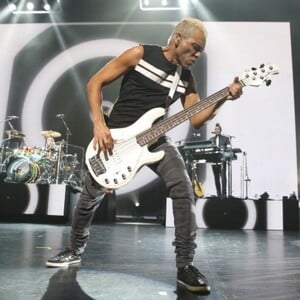