Tony Iommi Net Worth: Tony Iommi is an English songwriter, singer, and musician who has a net worth of $140 million. Iommi is probably best known for being the lead guitarist of the band Black Sabbath, which revolutionized rock music and helped create the genre of heavy metal. He is considered one of the greatest guitarists of all time, and he pioneered techniques that are in widespread use today. In fact, many people believe that he is the main creator of heavy metal music, along with a range of other sub-genres such as stoner rock, grunge, sludge, thrash, doom, death, and many others.

Part of his guitar-playing inventiveness was born out of necessity more than anything else. After suffering a work-related accident that almost chopped off all of his fingers, Tony was forced to adapt his playing style. The result was a heavily detuned, dark sound that became the hallmark of Black Sabbath and essentially all heavy metal bands that followed in the group's path. Outside of his work with Black Sabbath, Tony Iommi has released a number of solo albums, and he also helped found another band called Heaven & Hell after Black Sabbath started to lose momentum.

Early Life: Anthony Frank Iommi was born on February 19th of 1948 in Birmingham, England. Tony was raised in a Catholic household by a family who owned vineyards in Italy and a shop in Aston. He first met Ozzy Osbourne as a young boy in school, although Ozzy was one year younger than him. Iommi was picked on by local bullies, so he started studying martial arts at the age of 10 to protect himself. Tony initially wanted to play the drums, but he chose the guitar instead as it created less noise for his parents to deal with.

During his teen years, Iommi started working in a sheet metal factory. After he started to experience success as a musician for the first time, he informed his superiors that he would soon be quitting. For whatever reason, Tony was told to work on machinery that he had very little experience with during his last few weeks at work. An accident occurred one day, and Iommi lost the tips of his middle and ring fingers. He was 17 years old.

Although Tony was informed that he would never play the guitar again, he was encouraged to continue playing by those around him. He was tempted to re-learn how to play the guitar left-handed, but in the end, he created artificial fingertips for himself using melted plastic bottle caps. However, this approach created issues for Tony's music. First of all, he could no longer feel the pressure on the strings, which created a tendency for him to press down extremely hard on the strings. Because his injured fingers were less nimble, he also relied on fretting chords rather than single-note solos. Finally, Tony heavily detuned his guitar by up to three semitones in order to make his strings easier to bend. This created an incredibly "heavy" sound.

Career: Although Tony started off by playing in a wide range of rock bands throughout the 60s, it wasn't until he met up with Ozzy Osbourne, Bill Ward, and Geezer Butler that he achieved more notable success. This was the beginning of Black Sabbath. The group was eventually renamed "Earth," and Tony departed briefly in 1968.

However, by 1969 the group had come together once again, renaming themselves Black Sabbath. Iommi became an integral part of the group, helping to define their unique, heavily detuned sound. Although albums like "Master of Reality," "Paranoid," and "Sabbath Bloody Sabbath" revolutionized rock music and helped usher in a completely new genre, Sabbath had trouble adapting to the changing music scene.

Osbourne was eventually fired and replaced by Ronnie James Dio. Soon, Sabbath completely dematerialized with a number of members dropping out, including the newly-hired Dio. Eventually, Iommi started releasing solo albums, starting with "Seventh Star" in 1986. Much later, Black Sabbath would reunite and tour throughout the 2000s, and they even released another album in 2013 entitled "13."

In 2000, Tony released another solo album called "Iommi." In 2006, he started a new band called Heaven & Hell, which included all the members of Black Sabbath – minus Ozzy. This group has toured extensively with other bands like Megadeth, Judas Priest, and Testament.

Relationships: In 1973, Iommi married Susan Snowdon, although the marriage only lasted for three years. He then married a model named Melinda in 1980, and the couple had a child together before divorcing in the mid-80s. Tony eventually "saved" his daughter from foster care, as her mentally unbalanced mother was not able to care for her properly. Iommi won custody of his daughter and provided a stable home for her. Tony then married a woman named Valery, although they divorced in the late 90s. In 2005, he married vocalist Maria Sjöholm after meeting her in the late 90s.

Health Issues: In 2012, Tony was diagnosed with lymphoma. Over the next period, he received treatments while touring with Black Sabbath, and he successfully recovered. In 2016, he officially revealed that his cancer was in remission. Also in 2016, he revealed that he had an operation to remove a lump from his throat, although the lump wasn't cancerous.

Real Estate: In 2014, it was reported that Iommi was selling his home in England for $4.3 million. The residence is in Lapworth, Warwickshire, and it includes six bedrooms with a square footage of 8,000 square feet. Other features include a home cinema, a billiards room, and of course, a fully-functional music studio. Outside, there are stunning fountains and sculptures that decorate the grounds. 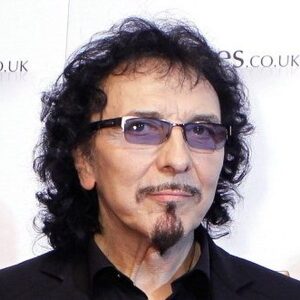