Born Thomas Cunningham Thayer on November 7, 1960 in Porttland, Oregon, Thayer's passion for music, especially the early 1970s hard rock, made him pick up electric guitar at age 13. After playing in a handful local bands, he decided to make a group of his own, Black 'n Blue, in 1981. Ever since its formation, the band has seen the release of 10 studio albums, enjoying worldwide fame and collaborating with notable musicians in the process. However, Tommy Thayer started to work with Kiss's Gene Simmons and Paul Stanley, especially after they asked him to work part-time on their forthcoming book Kisstor in 1994. This led to other projects in near future and eventually Thayer got a full-time role with Kiss with whom he worked on 8 studio albums. As an active supporter to community causes, Thayer sits on the Board of Trustees at Pacific University in Forest Grove, Oregon. He currently lives in the Los Angeles area together with his wife Amber. 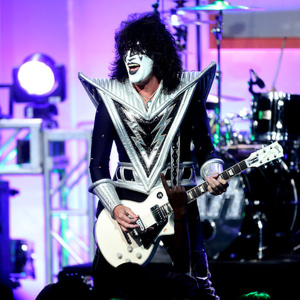