Tommy Shaw net worth: Tommy Shaw is an American guitarist who has a net worth of $18 million. Tommy Shaw has earned his net worth from his work with the popular rock band Styx. He has also played with the supergroup Damn Yankees and the Shaw Blades and released several solo albums.

Shaw was born on September 11, 1953, in Montgomery, Alabama. He left Montgomery after attending Robert E. Lee High School to join a band called The Smoke Ring. He was member of MS Funk, a Chicago-managed outfit that he played with for 3 years, which gave him a chance to be noticed by Styx during a 2-week club gig in Chicago. He joined a local band called Harvest after MSFunk disbanded. The band Harvest performed at the club Keglers Kove, in the bowling alley called Bama Lanes. Following Styx's moving to A&M, the guitarist and vocalist John Curulewski suddenly left the band shortly before they were to embark on a nationwide tour, and a frantic search to find a last-minute replacement was launched. Shaw's first album with Styx was Crystal Ball in 1976. Its follow-up album was titled, The Grand Illuison released in 1977 the album, which went platinum and also featured a radio hit by Shaw, "Fooling Yourself (The Angry Young Man)". Styx's eighth album, was Pieces of Eight, which was the breakout album for Shaw's songwriting talent. His rock-oriented contributions include "Renegade" and "Blue Collar Man" those were the only two major hits from this release, reaching #16 and #21 respectively on the Billboard Hot 100 Singles chart, and they became '70s rock-radio staples and perennial Styx concert favorites. Pieces of Eight also featured another minor radio hit in Shaw's tune "Sing for the Day". Shaw saw the decline of Styx with the #1 pop ballad "Babe" from the ninth Styx the album, titled Cornerstone in 1979, which was written by keyboardist Dennis DeYoung. 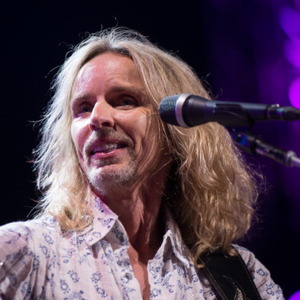