Tommy Aldridge net worth: Tommy Aldridge is an American hard rock and heavy metal drummer who has a net worth of $3 million. Tommy Aldridge was born in Pearl, Mississippi in August 1950. He has worked with several bands and artists including Black Oak Arkansas, Ozzy Osbourne, Pat Travers Band, Gary Moore, Ted Nugent, Whitesnake, Thin Lizzy, Yngwie Malmsteen, Vinnie Moore, and many others.

Tommy Aldridge was self-taught and became an influential drummer who has been hailed as a pioneer of the double bass drum used in rock music. Aldridge played on 10 Black Oak Arkansas albums and five for the Pat Travers Band. He was also featured on two albums by Gary Moore, four albums by Ozzy Osbourne, and six albums by Whitesnake. He has also played for Macalpine, Aldridge, Rock, Sarzo (MARS), Manic Eden, Motorhead, and others. Tommy Aldridge plays Yamaha drums since 1982. He began playing the drums professionally in 1970. 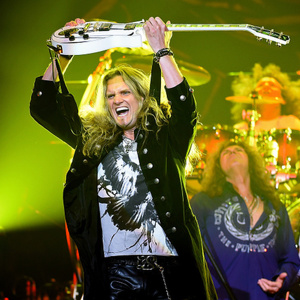