Tom Morello Net Worth: Guitarist Tom Morello, most famous for his guitar playing in the band Rage Against The Machine, has a net worth of $30 million. Outside of his work with Rage Against the Machine, Morello has also worked with bands such as Audioslave, Prophets of Rage, Street Sweeper Social Club, and his solo project, The Nightwatchman. Over the course of his career, Tom has collaborated with artists such as Bruce Springsteen and the E Street Band.

Morello is considered to be one of the greatest guitarists of all time, and he incorporates a number of interesting and innovative techniques to create a truly unique sound. He is known for his liberal use of guitar effects, and he also employs methods such as tapping and feedback noise. Outside of music, Morello is known for his strong political views, and he formed a nonprofit organization called Axis of Justice that stands for progressivism and social justice.

Early Life: Thomas Baptiste Morello was born on May 30th of 1964 in Harlem, New York City. Raised by a single mother, Tom's father returned to his native country of Kenya and denied the paternity of his son, who was sixteen months old at the time. Morello was subsequently raised in Libertyville, Illinois, where his mother worked as a U.S. history teacher. During this period, Tom began singing in the school choir and became involved in the drama club.

During Tom's teen years, he quickly identified as an anarchist. After graduating from high school in 1982, he enrolled at Harvard University and studied political science. He then graduated in 1986 with a Bachelor of Arts in social studies. After leaving college, Tom relocated to Los Angeles, where he found work as a stripper. He also toyed with the idea of pursuing a career in politics and even worked in the office of United States Senator Alan Cranston. Eventually, Tom focused wholeheartedly on music.

Career: Morello had been involved in various bands since the age of 13. During this period, he purchased his first guitar and joined a band called Nebula. His next few bands included Electric Sheep, and he was inspired by Iron Maiden and Kiss. In 1991, Morello was on a mission to start a new band. He enlisted rapper Zack de la Rocha, drummer Brad Wilk, and bassist Tim Commerford to start a new band called Rage Against the Machine. In 1992, this group signed a record deal with Epic Records and started performing regularly in Los Angeles. Also in 1992, Rage Against the Machine released their debut album.

Over the next few years, Morello and Rage Against the Machine experienced financial and critical success, releasing a number of albums. After the group had released a total of four albums, inner turmoil threatened to split up Rage Against the Machine. In 2000, de la Rocha quit, and the group performed their last concert that year. They officially disbanded in late 2000.

With de la Rocha gone, Morello collaborated with the remaining members of Rage Against the Machine to form Audioslave. Singer Chris Cornell performed vocals, and the group released three albums over the next few years. This first self-titled album made a massive impact, achieving triple-platinum status while being widely praised by critics. Audioslave followed up in 2005 with "Out of Exile," which reached platinum status and topped the charts. After releasing a third album entitled "Revelations," Cornell departed and the band broke up.

In 2007, Rage Against the Machine reunited and performed at Coachella. Because of this success, the group decided to stay together. Morello and the original members then toured throughout the world over the next few years. In 2020, it was announced that Rage Against the Machine would be reuniting once again for Coachella, although their summer tour was canceled due to the coronavirus pandemic.

Outside of Audioslave and Rage Against the Machine, Tom Morello has been involved in a wide range of additional music projects. In 2003, he started "The Nightwatchman," which is a one-man folk music entity that he describes as his "political folk alter ego." Nightwatchman toured with artists like Billy Bragg, Bootsy Riley, and Mike Mills in 2003 with the Tell Us the Truth Tour. In 2007, Morello released an album as the Nightwatchman entitled "One Man Revolution."

In addition, Morello is known for his involvement in the Street Sweeper Social Club, which formed in 2006. This group continues to perform and release music as of 2020. In 2016, Morello also joined Prophets of Rage. Described as a "supergroup," this rock band includes Tim Commerford, Brad Wilk, Chuck D, DJ Lord, and B-Real. This mish-mash of rock and hip-hop musicians have released a number of EPs and LPs, and they have toured extensively. Other side projects include The Atlas Underground and collaborations with groups like Primus, Anti-Flag, Linkin Park, Knife Party, and more.

Political Views: Through organizations such as Axis of Justice and his musical groups, Tom Morello has become well known for his strong political views. He recommends that people read books written by communist figures such as Karl Marx and Che Guevera. Tom also advocates for the abolition of the death penalty and for increased immigrant rights. He is known for spreading awareness of various boycotts and labor campaigns. In 2006, Morello was awarded the Eleanor Roosevelt Human Rights Award for his contributions to worker's rights.

Relationships: Tom Morello and his wife have two children together, and Tom also has another child from a previous relationship. 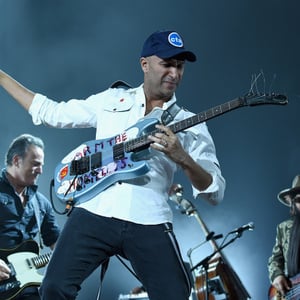