What Is Tom Kaulitz's Net Worth?

Tom Kaulitz is a German musician and producer who has a net worth of $25 million. Kaulitz first became famous for being the guitarist of the band Tokio Hotel, and he has been married to supermodel Heidi Klum since 2019. With Tokio Hotel, Tom has released the albums "Schrei" (2005), "Zimmer 483" (2007), "Scream" (2007), "Humanoid" (2009), "Kings of Suburbia" (2014), and "Dream Machine" (2017). Their debut, album, "Schrei," was certified 2x Platinum in Austria and Russia. The Tokio Hotel singles "Durch den Monsun"/"Monsoon," "Rette mich"/"Rescue Me," "Der letzte Tag," and "Übers Ende der Welt"/"Ready, Set, Go!" all reached #1 on the German GfK Entertainment chart and the Ö3 Austria Top 40 chart. Kaulitz appeared in the TV movie "Verrückt nach dir" in 1994, and in 2010, he starred in a commercial for Reebok sneakers; at the time, he said that he got 10 new pairs of sneakers every week. Kaulitz also co-produced the 2010 DVD/CD "Tokio Hotel: Humanoid City Live."

Tom Kaulitz was born on September 1, 1989, in Leipzig, East Germany. His identical twin brother, Bill, is Tokio Hotel's lead singer. Their parents, Jörg and Simone, split up when the boys were 7 years old, and Simone married Fatun guitarist Gordon Trümper in 2009 after 12 years together. Tom began playing guitar at an early age, and Bill showed an interest in singing, so Trümper helped them start a band. Bill has said in several interviews that he and Tom began writing music when they were just 7 years old.

Tom and Bill began playing live when they were 10 years old. At the age of 12, they met bassist Georg Listing and drummer Gustav Schäfer, who were in the audience at one of their shows, and they formed the band Devilish in 2001. When Bill competed on "Star Search" in 2003, he caught the attention of music producer Peter Hoffmann, and the band soon changed its name to Tokio Hotel. In 2005, the band signed with Universal Music Group, and they released their first single, "Durch den Monsun" / "Monsoon" in August of that year. The single was certified Gold in Belgium and Austria, and the following month, they released their debut album, "Schrei," which reached #1 on the charts in Germany and Austria. Three of the album's singles topped the charts in Germany and Austria, and "Der letzte Tag" went Gold in Austria. Tokio Hotel's 2007 follow-up, "Zimmer 483," was certified 3x Platinum in Russia and Platinum in Austria. The album reached #1 in Germany and #2 in Austria and France, and the singles "Übers Ende der Welt"/"Ready, Set, Go!," "Spring nicht"/"Don't Jump," and "An deiner Seite (Ich bin da)"/"By Your Side" were top 10 hits in Germany, Austria, and France. Later that year, they released the album "Scream," and it went 2× Platinum in Russia and Platinum in Portugal. The album reached #1 in Sweden, and they followed it with 2009's "Humanoid," which was certified Gold in four countries. The band's next two albums, 2014's "Kings of Suburbia" and 2017's "Dream Machine," reached the top 10 in Germany and Austria. In 2021, Tokio Hotel released the single "White Lies" (featuring VIZE), and it was certified Platinum in Austria.

In March 2022, the band postponed their Beyond the World Tour until the following year due to the Russian invasion of Ukraine, stating, "It just doesn't feel right to do business as usual and we won't. At the same time music has always been a place of love, hope and unity and we're trying to find ways to keep sharing this with you." 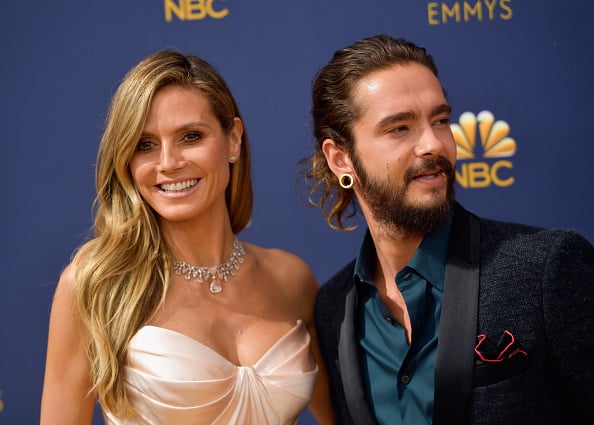 Tom married model Ria Sommerfeld in 2015, and he filed for divorce in September 2016. In May 2018, Kaulitz and Heidi Klum, who is 16 years his senior, made their red carpet debut as a couple at the Cannes Film Festival, and Klum announced their engagement on Instagram on Christmas Eve of that year. The couple privately married in February 2019, then they had a wedding ceremony on a yacht in Italy six months later. Tom is stepfather to Heidi's children, Leni, Henry, Jonah, and Lou. In 2014, Kaulitz admitted to overdosing on Viagra and said he could not see straight for two days. In late 2008/early 2009, the members of Tokio Hotel were pursued by several female stalkers, and some of them followed Tom to his parents' home and attacked his mother. In April 2009, he punched one of the stalkers at a Hamburg gas station and drove away. Though Kaulitz was investigated on possible bodily harm charges at one point, he never stood trial for the incident, and he pressed charges against the stalker in December 2009. In October 2010, Tom and Bill moved to Los Angeles.

Tom and Heidi live in a $9.8 million mansion in the Bel-Air area of Los Angeles. The home measures 11,000 square feet and includes six bedrooms, nine bathrooms, a dance studio, and a private gym.