Laura was born Thomas James Gabel in Fort Benning, Florida in November 1980. Gabel has dealt with gender dysphoria since childhood. She came out publicly as a transgender woman in 2012. From that point on she publicly began going by the name Laura Jane Grace.

Gabel formed Against Me! in 1997 in Gainesville, Florida. Their debut album "Against Me! Is Reinventing Axl" Rose was released in 2002. As of this writing, the band has released a total of seven studio albums including their latest albums :Transgender Dysphoria Blues" (2014) and "Shape Shift with Me" (2016) . The former album reached #2 on the US Indie chart, #5 on the US Alternative chart, and #6 on the US Rock chart. The latter album reached #80 on the Billboard 200 and #4 on US Independent Albums chart. Their most popular songs include "Thrash Unreal", "Stop!", and "I Was a Teenage Anarchist". 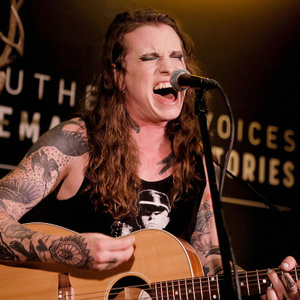