Tom Araya Net Worth: Tom Araya is a Chilean-American musician who has a net worth of $14 million dollars. Born in 1961 in Vina del Mar, Chile, Tom Araya began playing bass when he was eight years old. He and his older brother would often play music together with Tom on the bass and Cisco on the guitars.

During the 1980s, Araya became a certified respiratory therapist and soon after joined Slayer. His therapy work paid for the group's first record, "Show No Mercy", in 1983, and within two years, he quit his hospital job to tour with the band. He has contributed numerous lyrics to the band, most about his fascination with serial killers, including Jeffrey Dahmer and Ed Gein. His song "Eyes of the Insane" won a Grammy Award. Slayer has sold more than three million copies of their ten studio albums as of 2009. In 2006, Araya underwent gall bladder surgery, which delayed the band's tour and album release. Four years later, his back surgery disrupted another Slayer tour. In 2011, he was given the keys to his hometown. Araya is considered one of the top 100 Greatest Metal Vocalists of All-Time by "Hit Parader". He and his wife, Sandra, live on a ranch in Texas with their two children. 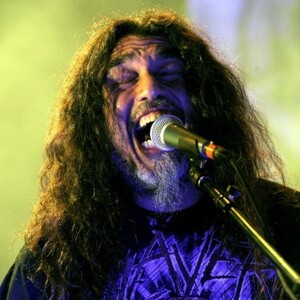