Tito Puente Net Worth: Tito Puente was an American salsa musician and Latin jazz composer who had a net worth of $5 million. Ernesto Antonio "Tito" Puente (aka Tito Puente) was born July 23, 1923 in New York City, New York. Puente was often referred to as The Musical Pope, El Rey de los Timbales (The King of the timables) and The King of Latin Music.

Over his 50-year career, he was best known for dance-oriented mambo and Latin jazz compositions. Puente and his music appear in many films, such as The Mambo Kings and Fernando Trueba's Calle 54. He also guest-starred on several television shows (Sesame Street, The Cosby Show and most notably The Simpsons two-part episode Who Shot Mr. Burns?). The son of Puerto Rican immigrants, Puente grew up in New York City's Spanish Harlem and became a professional musician at age 13. He learned to play a number of instruments as a child, beginning with the piano then moving to percussion, saxophone, vibraphone and timbales. After an apprenticeship in the historic Machito Orchestra, Puente was drafted into the U.S. Navy and served during World War II. He returned to New York in 1945 to study at New York City's famed Juilliard School and in 1948 formed a band that would later be known as the Tito Puente Orchestra. By the '50s, the band was attracting large crowds and Puente became a Latin music sensation. In 1958, Puente released his best-selling album, Dance Mania, and more hits followed. Throughout his career, Puente performed with a number of leading jazz performers and also with many symphony orchestras. Puente received numerous awards for his work, including five Grammy Awards. In 1999, Puente was awarded an honorary degree at Columbia University. Ernesto Antonio "Tito" Puente died June 1, 2000 (aged 77) in New York City, New York. 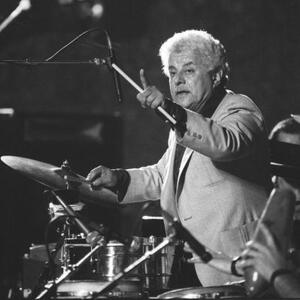