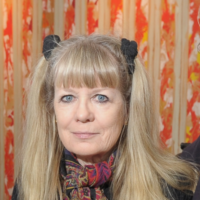 Tina Weymouth Net Worth: Tina Weymouth is an American musician who has a net worth of $20 million. Born Martina Michele Weymouth in November of 1950, she is best known by her stage name, Tina Weymouth. She is known for her work in the band, Talking Heads, as well as Tom Tom Club. She helped co-found each of the projects and acted as a guitar (or bass) player in both of them, as well as provided influence in their members and music. Weymouth got started in the Talking Heads when fellow band mate, Chris Frantz, asked her to join. Frantz served as the drummer for both the Talking Heads and Tom Tom Club. The pair were dating at the time. Weymouth has seven siblings, to of her sisters, Lani and Laura, also performed with the Tom Tom Club. Her father, Ralph, is a retired U.S. Navy Vice Admiral. After having dated Chris Frantz, also her fellow band mate, for multiple years, they were married in 1977. The couple has two sons, named Robin and Egan. The family resides in Fairfield, Connecticut. Weymouth's older brother, Yann was married to Lally Weymouth for several years, who worked as a publisher for the Washington Post. Weymouth's niece, Katharine, now holds that title.