How much is Tim Lambesis Worth?

Tim Lambesis Net Worth: Tim Lambesis is an American musician who has a net worth of $4 million dollars. Born November 21, 1980 in Scottsdale, Arizona, Tim Lambesis is best known as lead vocalist and a founding member of American metalcore band As I Lay Dying. Also known for his bodybuilding physique and a solo side project called Austrian Death Machine (a tribute to actor/bodybuilder Arnold Schwarzenegger), he became equally infamous in 2013 when he was arrested on May 7th of that year for attempting to hire an undercover police officer to murder his wife. After a lengthy court battle, and numerous claims of "not guilty", Lambesis finally pleaded guilty on February 25, 2014 and was sentenced to six years in prison on May 16, 2014 (and was credited with 48 days credit for time served). In subsequent divorce filings by his estranged wife Meggan Murphy Lambesis, and through later admissions by the musician, it came to light that Tim Lambesis had had an extramarital affair near the end of their marriage. Further, he claimed to have renounced his Christian beliefs to make it easier for him to have an affair. In June of 2014, Lambesis came out as a self-professed atheist, claiming he (and other band members) played along with billing themselves as Christians just to sell records. 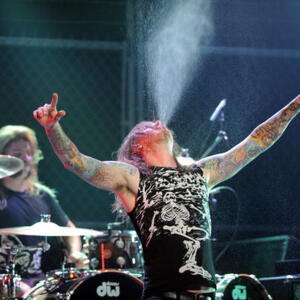