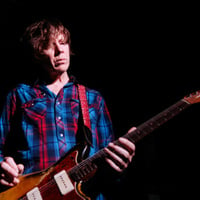 Thurston Moore net worth: Thurston Moore is an American musician and singer who has a net worth of $8 million. Thurston Moore was born in Coral Gables, Florida in July 1958. He is best known for being the singer, songwriter, and guitarist of the band Sonic Youth. The band was formed in New York City in 1981. Thurston married Sonic Youth bassist and vocalist Kim Gordon in 1984 and the two divorced in 2011. Their debut studio album Confusion Is Sex was released in 1983. The band has released a total of 17 studio albums and their latest, The Eternal, was released in 2009 and reached #18 on the Billboard 200 chart. Sonic Youth has had the most success with their singles "Kool Thing", "100%", and "Bull in the Heather". The band split in 2011 and Moore started the band Chelsea Light Moving in 2012. He has also released four studio albums and authored six books.