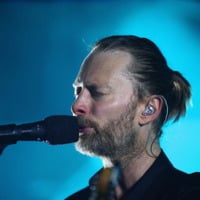 What is Thom Yorke's Net Worth?

Thom Yorke is an English musician, singer, and songwriter who has a net worth of $45 million dollars. Yorke is the lead singer and primary songwriter for the band, Radiohead.

As of this writing, Thom has released nine studio albums with Radiohead and three solo studio albums. With more than 30 million records sold, Radiohead is considered one of the biggest art-rock acts since Pink Floyd and found mainstream success after they released their debut single "Creep" in 1992. MTV helped turn the song into a teen-angst anthem and soon the band rose to global prominence. As for their full-length albums, they include the following: "Pablo Honey" (1993), "The Bends" (1995), "OK Computer"(1997), "Kid A" (2000), "Amnesiac" (2001), "Hail to the Thief" (2003), "In Rainbows" (2007), "The King of Limbs"(2011), and "A Moon Shaped Pool" (2016). All the albums were well-received by rock audiences, and "OK Computer" is considered one of the greatest albums of all time by many music critics.

While Radiohead is still his top priority, Thom has also found the time to work on some side projects, like his solo albums "The Eraser" (2006), "Tomorrow's Modern Boxes" (2014), and "Anima" (2019) and his work with Atoms for Peace. In 2019, Radiohead was inducted into the Rock and Roll Hall of Fame, and the band has won three Grammys.

Thom Yorke was born Thomas Edward Yorke on October 7 1968, in Wellingborough, Northamptonshire, England. Thom's father was a nuclear physicist and chemical equipment salesman, and his younger brother, Andy, grew up to become the lead vocalist of the band Unbelievable Truth. Yorke's left eye has been paralyzed since birth, and he had surgery on it five times by the age of 6. He has said that the last surgery he had was botched, resulting in a drooping eyelid. When Thom was an infant, the family moved to Scotland, then moved to Oxfordshire, England, when he was 7 years old. Yorke got his first guitar that year, and he made his own guitar at age 10, then joined a band.

Thom attended Abingdon, a boys' public school, where he met future Radiohead bandmates Philip Selway, Ed O'Brien, and Jonny and Colin Greenwood. They formed the band On a Friday, and though they were offered a recording contract with Island Records, the band members turned it down because they wanted to attend university before pursuing a music career. In 1998, Yorke enrolled at the University of Exeter to study Fine Arts and English and played with a band called Headless Chickens. On a Friday began playing together again in 1991, signed a record deal with Parlophone, and became known as Radiohead.

Radiohead released the single "Creep" in 1992, and it was a top 10 hit in the U.K., Australia, France, and Belgium, and it reached #2 on the "Billboard" Alternative Airplay chart. The band's debut album, "Pablo Honey," went 2x Platinum in the U.K. and Canada, and their next two albums, "The Bends" and "OK Computer" were certified 4× and 5x Platinum, respectively, in the U.K. "OK Computer" topped the charts in the U.K., Belgium, and Ireland and spawned the singles "Paranoid Android," "Karma Police," "Lucky," and "No Surprises." Yorke had a mental breakdown after the band's "OK Computer" tour ended in 1998 and couldn't write new music, so he moved to Cornwall to recover. Both "Rolling Stone" and "Pitchfork" named Radiohead's next release, 2000's "Kid A," the decade's best album. The band released their 2007 album, "In Rainbows," independently, letting fans pay whatever amount they chose to download the album. They also self-released 2011's "The King of Limbs," and in 2016, "A Moon Shaped Pool," their first album in five years, was released to critical acclaim, with several publications naming it one of the year's best albums. 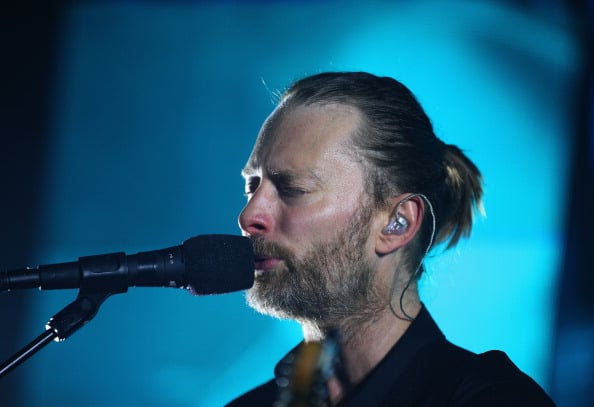 Thom recorded his first solo album, "The Eraser," while Radiohead was on hiatus in 2004, and it went Gold in the U.K. and Canada after its release in July 2006. The album earned a Grammy nomination for Best Alternative Music Album, and Yorke followed it with the E.P. "Spitting Feathers" in November 2006 and the remix album "The Eraser Rmxs" in August 2008. His second solo studio album, "Tomorrow's Modern Boxes," wasn't released until 2014; Thom released it on BitTorrent, and it was downloaded more than a million times in the first week. In June 2019, his third solo album, "Anima," was released with an accompanying Paul Thomas Anderson-directed short film, which was nominated for a Best Music Film Grammy. In 2009, he formed the band Atoms for Peace with Flea, Nigel Godrich, Joey Waronker, and Mauro Refosco. Atoms for Peace toured for "The Eraser" in 2010 and released the album "Amok" in 2013.

Thom had a 23-year relationship with artist Rachel Owen, and they welcomed son Noah in 2001 and daughter Agnes in 2004. Yorke and Owens reportedly secretly married in May 2003, and they amicably split up in 2015. Sadly, Rachel passed away from cancer in December 2016. Thom went on to marry actress Dajana Roncione in September 2020. A vegetarian and vocal critic of the meat industry, Yorke appeared in a film for the charitable organization Animal Aid in 2015. Thom celebrated Barack Obama's election in 2008 by offering free downloads of a "Harrowdown Hill" remix, and he hasn't been shy about his dislike of Donald Trump, saying that Trump and his supporters are "utterly bereft of moral authority." Yorke is opposed to Brexit and participated in the People's Vote march in 2019. He has been involved with the fight against climate change since 2000 and is a supporter of Friends of the Earth; in 2006, he headlined the organization's Big Ask Live benefit concert meant to "persuade the government to enact a new law on climate change." In 1999, Thom attended the G8 summit in support of the Jubilee 2000 movement, and in 2004, he spoke at a Campaign for Nuclear Disarmament rally.