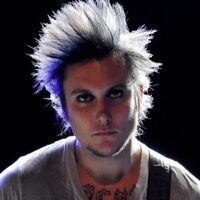 Synyster Gates net worth: Synyster Gates is an American musician who has a net worth of $16 million dollars. Synyster Gates was born Brian Elwin Haner, Jr. in Huntington Beach, California in July 1981. He is sometimes known simply as Syn. He is best known for being the lead guitarist for the band Avenged Sevenfold. His father was musician, author, and comedian Brian Haner, Sr. He worked with Sam the Sham's band. Syn studied as part of the Guitar Institute of Music program at the Musicians Intuited in Los Angeles, California. Avenged Sevenfold formed in 1999. Their style can be described as heavy metal, hard rock, or metalcore. The band has released six studio albums and has sold over eight million albums worldwide. Their 2010 album Nightmare and their 2013 album Hail to the King both reached #1 on the US Billboard 200 as well as Finnish charts. Their most popular songs include "Bat Country", "Nightmare", and "Hail to the King". The band won the MTV Music Award for Best New Artist in 2006. Synyster Gates has won awards from Total Guitar, Dimebag Darrell, the Golden God Awards. Gates also has played with the experimental metal band Pinkly Smooth and they have released one album.