What is Sting's Net Worth?

Sting is an English musician, actor, real estate investor and philanthropist who has a net worth of $550 million. He is best known for being a member of The Police and for a prolific career as a solo artist. As of this writing The Police released five studio albums, which were all certified Platinum in several countries. Their most successful album, 1983's "Synchronicity," went 8x Platinum in the U.S., was inducted into the Grammy Hall of Fame, and was included in Rolling Stone magazine's lists of the "500 Greatest Albums of All Time" and "100 Best Albums of the Eighties."

Sting was born Gordon Matthew Thomas Sumner on October 2, 1951, in Wallsend, Northumberland, England. His mother, Audrey, was a hairdresser, and his father, Ernest, worked as an engineer and milkman. Sting grew up with three younger siblings, Anita, Philip, and Angela, and he attended St. Cuthbert's Grammar School and the University of Warwick (but left before graduating). Sting found work as a tax officer, building labourer, and bus conductor, then enrolled at the Northern Counties College of Education and became certified to teach primary school in 1973. As a college student, he played jazz during his time off, performing with the Newcastle Big Band, Phoenix Jazzmen, and Last Exit, and he continued during the two years he spent teaching at St. Paul's First School. He earned the nickname "Sting" because he often wore a striped yellow and black sweater that resembled a bee.


Sting moved to London in 1977 and formed The Police with Stewart Copeland and Henry Padovani (who would later be replaced by Andy Summers). Their debut album, "Outlandos d'Amour," was released on November 2, 1978, and cracked the top 10 on the charts in the U.K., France, New Zealand, and the Netherlands. The album featured the singles "Roxanne" and "Can't Stand Losing You," and they followed it with 1979's "Reggatta de Blanc," which reached #1 on the charts in four countries. The single "Message in a Bottle" was certified Gold in the U.K., and their next three albums, 1980's "Zenyatta Mondatta," 1981's "Ghost in the Machine," and 1983's "Synchronicity," spawned hit singles such as "Don't Stand So Close to Me," "Every Little Thing She Does Is Magic," "Every Breath You Take," and "Wrapped Around Your Finger." The band won six Grammys before Sting left to pursue a solo career, and they reunited for a world tour in 2007. He released his first solo studio album, "The Dream of the Blue Turtles," on June 1, 1985, and went on to release 13 more, including "…Nothing Like the Sun" (1987), "Ten Summoner's Tales" (1993), "Mercury Falling" (1996), and "Brand New Day" (1999), which were all certified Platinum or higher in the U.K. and U.S.

In 1993, Sting teamed up with Bryan Adams and Rod Stewart to record the song "All for Love" for "The Three Musketeers" soundtrack, and it reached #1 on the charts in Australia, Germany, Italy, Ireland, Switzerland, and the U.S. The following year, he performed on the Julio Iglesias song "Fragile," and later appeared as a featured performer on Tina Turner's "On Silent Wings" (1996), Toby Keith's "I'm So Happy I Can't Stop Crying" (1997), and Sheryl Crow's "Always on Your Side" (2006). Sting earned his first Academy Award nomination in 2000, for "My Funny Friend and Me" from the animated Disney movie "The Emperor's New Groove, and he lent his voice to the 2007 computer-animated film "Bee Movie." In 2009, he appeared as himself in the films "Brüno" and "Still Bill," and he followed suit with the TV series "Life's Too Short" in 2011 and "The Michael J. Fox Show" in 2013. In 2015, Sting earned a Tony nomination for Best Original Score for his musical "The Last Ship," and he also received nominations from the Outer Critics Circle Awards and Drama Desk Awards. The musical premiered in Chicago in June 2014 and moved to Broadway a few months later. He released his 14th studio album, "My Songs," in May 2019 and the complilation album "Duets" in March 2021. In April 2019, it was announced that Sting would begin a residency at The Colosseum at Caesars Palace, "My Songs: The Las Vegas Residency," in March 2020, but it was postponed due to the COVID-19 pandemic.

"Every Breath You Take" Earnings

Sting's classic ballad from 1983 about an unhealthy obsession with a lost love, is one of the top 10 most profitable songs of all time in terms of royalties. After being one of the biggest hits of 1983, the song received a huge re-boot in popularity in 1997 when the rapper Puff Daddy (now known as Diddy) released his cover tribute to the late rapper Notorious B.I.G., "I'll Be Missing You." Diddy's version would go on to win a Grammy and become one of the best-selling singles of all time with more 7 million copies sold worldwide. In 2010, Sting's former business manager claimed that this song is responsible for more than 1/4 of all the singer's lifetime publishing income and today still produces $2,000 a day ($730,000 per year) in royalties income for Sting.

Songwriting for "Every Breath You Take" is credited 100% to Sting. When Diddy produced his version, he neglected to ask for permission first, which allowed Sting to demand and receive an unheard of 100% of the remix's publishing royalties (the standard would have been 25-50%). Interestingly, the only part of the original Police song that Diddy actually sampled was Andy Summer's guitar riff. Neither Sting's vocals nor Stewart Copeland's drum can be heard anywhere on "I'll Be Missing You." Because Sting is listed as the sole composer, Summers did not receive a dime in royalties from Diddy and was not even consulted for his blessing. In fact, Summers was not even aware of the song until his son heard it on the radio. In a recent interview, Andy Summers called Puff Daddy's song "the major rip-off of all time." Furthermore, he elaborated: "He actually sampled my guitar, and that's what he based his whole track on. Stewart's not on it. Sting's not on it. I'd be walking round Tower Records, and the fucking thing would be playing over and over. It was very bizarre while it lasted."

In February 2022, Sting became the latest prolific artist to sell his songwriting catalog. Sting's sale to Universal Music Publishing Group fetched $300 million. The sale included his entire song catalog from his time with The Police and as a solo artist. 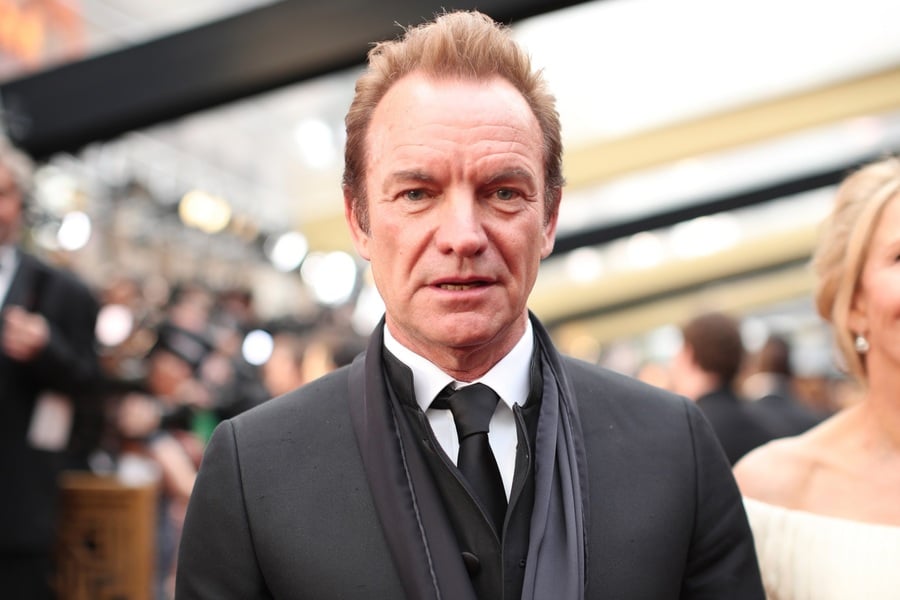 Sting was married to actress Frances Tomelty from 1976 to 1984, and they welcomed son Joseph on November 23, 1976, and daughter Fuchsia Katherine on April 17, 1982. The couple split up after Sting began an affair with actress Trudie Styler, who was their neighbor and Tomelty's best friend. Sting married Trudie on August 20, 1992, and they have four children together, Brigitte (born January 19, 1984), Jake (born May 24, 1985), Eliot (born July 30, 1990), and Giacomo (born December 17, 1995). In 1995, Sting appeared in court to give evidence against Keith Moore, his former accountant, who had stolen £6 million ($7.6 million) from the star; Moore was sentenced to six years in jail. Sting is a vocal proponent of yoga and wrote the foreword to Ganga White's 2007 book "Yoga Beyond Belief." He is a supporter of the Newcastle United Premier League football club and wrote the song "Black and White Army (Bringing The Pride Back Home)" in support of the team.

In 1981, Sting performed at The Secret Policeman's Other Ball, a gala for Amnesty International, and he later took part in concerts for the organization, such as the 1988 Amnesty International Human Rights Now tour. He joined Band Aid in 1984 and was involved in the recording of "Do They Know It's Christmas?" and the 1985 Live Aid concert. Sting and Styler co-founded the Rainforest Foundation Fund with Kayapo Indian leader Raoni Metuktire, and a species of Colombian tree frog was named Dendropsophus stingi in his honor due to his "commitment and efforts to save the rainforest." Sting has also performed at the Music for Montserrat benefit concert, Live Earth, and Hope for Haiti Now as well as the televised benefit concerts "America: A Tribute to Heroes" and "Hurricane Sandy: Coming Together." He is a patron of Bees for Development and the Elton John AIDS Foundation, and he and Trudie received the Peace Abbey Courage of Conscience award in 2000.

Sting has been nominated for 45 Grammys, taking home the prize 17 times. His music for "The Emperor's New Groove," "Kate & Leopold," "Cold Mountain," and "Jim: The James Foley Story" earned him Academy Award nominations, and he won a Golden Globe for Best Original Song – Motion Picture for "Until…" from "Kate & Leopold." Sting won a Primetime Emmy for Outstanding Individual Performance in a Variety or Music Program for "Sting …All This Time" and a World Soundtrack Award for "You Will Be My Ain True Love" (shared with Alison Krauss) from "Cold Mountain." The American Music Awards presented him with an Award of Merit in 2016, and the American Screenwriters Association honored him with a David Angell Humanitarian Award in 2004. Sting earned MTV Video Music Awards for Best Cinematography in a Video for "Every Breath You Take" and "We'll Be Together," and he won the Legend in Action award at the 2000 My VH1 Music Awards and the Icon Award at the 2016 BMI London Awards. He received Kennedy Center Honors in 2014 and the "Billboard" Music Awards gave him the Century Award in 2003. Sting received a star on the Hollywood Walk of Fame in 2000, and he was inducted into the Songwriters Hall of Fame in 2002.

The couple has also owned homes in England, Italy and Los Angeles where they own a 7-bedroom, 10-bathroom Malibu beach house that they listed on the rental market in 2017 for $200,000 for the summer. 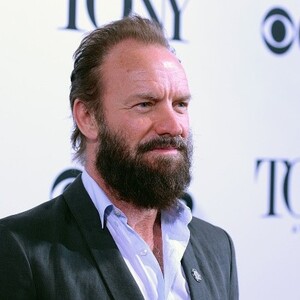