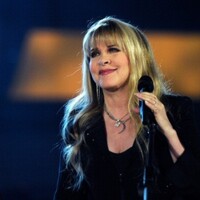 What is Stevie Nicks' Net Worth?

Stevie Nicks is an American singer/songwriter who has a net worth of $120 million. She is well known for being a member of the supergroup Fleetwood Mac, as well as having her own highly successful solo career. Stevie is the only woman in history, as of this writing, to be inducted into the Rock & Roll Hall of Fame twice: as a member of Fleetwood Mac and then as a solo artist.

Stevie wrote many songs that would go on to become modern classics. As the songwriter and composer, she has earned the lion's share of royalties for those works over the decades. In December 2020 she sold an 80% interest in these copyrights to music publisher Primary Wave for $80 million.

Stephanie Lynn Nicks, better known as Stevie Nicks, was born in Phoenix, Arizona, on May 26, 1948. Her father, Jess Nicks, was the president of Greyhound, and as a result the family moved around the country fairly often. Her nickname "Stevie" came as a result of her pronouncing her name as "tee-dee" when she was a toddler. She began singing at a young age, when her grandfather taught her to sing duets with him. At age 16, Nicks received a Goya guitar, and began writing her own songs. While a student at Menlo-Atherton High School in Atherton, California, Nicks met Lindsey Buckingham, her future musical and romantic partner. Buckingham invited her to join his psychedelic rock band Fritz, and the band enjoyed minor success as the opening act for artists like Jimi Hendrix and Janis Joplin during the late 1960s. Both Nicks and Buckingham attended San Jose State University, but eventually she dropped out of college to pursue her musical career full time.

After Fritz disbanded in 1972, Nicks continued to work with Buckingham on new musical projects, and they managed to secure a record deal and release an album as a duo, "Buckingham Nicks", in 1973. After working a series of odd jobs, the pair were contacted by drummer Mick Fleetwood, and they joined his band Fleetwood Mac in 1975. Fleetwood Mac's tenth album (the first featuring Nicks and Buckingham), "Fleetwood Mac", was released in July 1975. Their next album, "Rumours" (1977), was the best-selling album of the year and reported sales of over 40 million copies worldwide. It remained in the No. 1 spot on the American albums chart for 31 weeks and reached the top spot in various other countries as well. It also won Album of the Year in 1978 and produced four U.S. Top 10 singles. Other albums she released with Fleetwood Mac include "Tusk" (1979), "Mirage" (1982), "Tango in the Night" (1987), "Behind the Mask" (1990), and "Say You Will" (2003).

Nicks is known for her distinctive voice, incorporating a fast vibrato, her mystical visual style and symbolic lyrics. As a solo artist, she has been nominated for eight Grammy Awards, and with Fleetwood Mac she has been nominated for six Grammy Awards. She is the only woman to be inducted into the Rock and Roll Hall of Fame twice—once as a member of Fleetwood Mac in 1998, and once as a solo artist in 2019. 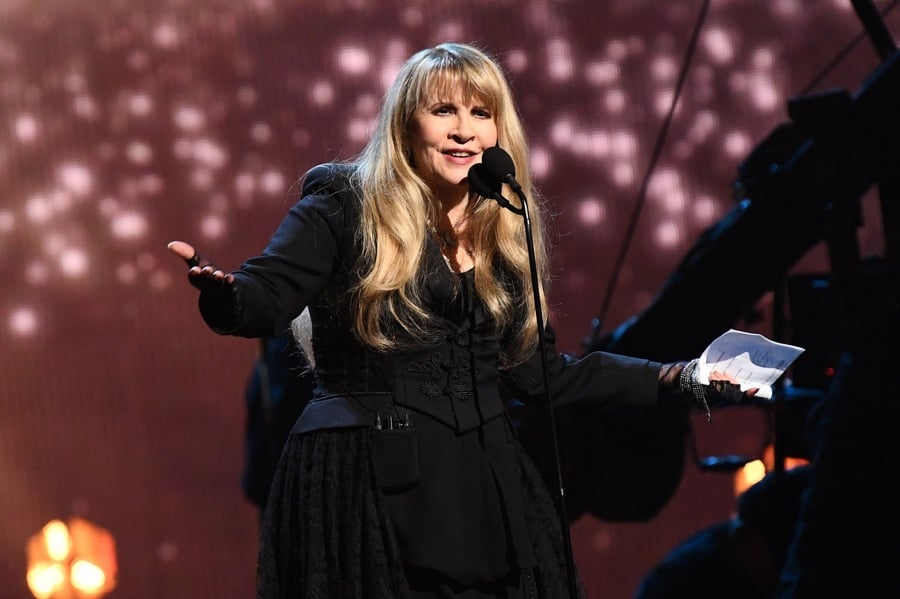 In October 2018 we learned some of the financial inner-workings of today's Fleetwood Mac thanks to a lawsuit filed by on-again-off-again member Lindsey Buckingham. Buckingham sued his former bandmates after he was abruptly removed from the group's 2018-2019 Live Nation tour. The lawsuit claimed that according to terms of their deal with Live Nation, each band member would receive $200,000 per show over 60 shows, for a total payout of $12 million. The amount could reach as high as $14 million depending on various attendance milestones and additional dates added down the road. Three months later the lawsuit was settled for an undisclosed amount. Buckingham released a statement saying:

On December 4, 2020 it was announced that Stevie had reached a deal to sell an 80% stake in her music catalog to music publisher Primary Wave at a value of $100 million, meaning she was paid $80 million while still holding a 20% stake. The catalog includes the copyright to songs like "Edge of Seventeen", "Landslide" and "Rhiannon".

In 2005, Nicks paid roughly $9 million for a gated home on 1.2 acres in the Pacific Palisades neighborhood of Los Angeles. She listed the home for sale in December 2017 for $14 million. She did not ultimately get a buyer for that price. She did eventually sell the home in an off market deal so the exact date and final price are not available. In 2004, she paid $3 million for an ocean-view penthouse condo in nearby Santa Monica.

In 1981, Nicks built a custom 8,000 square-foot mansion in Paradise Valley, Arizona, not far from where she was born and grew up. For many years she shared the compound with her brother and his family. She sold the home in 2007 for $3 million.

Nicks has only been married once, to Kim Anderson in 1983. Anderson was the widower of her friend Robin Anderson, who passed away from cancer shortly after giving birth and naming Nicks the godmother of her child. Nicks has said that she and Anderson only got married because they "were grieving and it was the only way that [they] could feel like [they] were doing anything", and they got divorced after only three months.

People Nicks has been romantically linked to include Lindsey Buckingham, Mick Fleetwood, Don Henley, J.D. Souther, Jimmy Iovine, and Joe Walsh. She is an ordained minister with the Universal Life Church, and was the officiant at the wedding of singers John McCauley and Vanessa Carlton.