What is Steve Vai's Net Worth?

Steve Vai is an American guitarist, songwriter and producer who has a net worth of $12 million. Steve Vai has won three Grammy Awards and has recorded and toured with bands and artists like Whitesnake, Alice Cooper, and Mary J. Blige.

Vai became interested in the guitar due to his fascination as a teenager with such legendary artists as Jimi Hendrix, Led Zeppelin and Alice Cooper and, upon starting high school, took lessons with an older player from the school, Joe Satriani (guitarist extraordinaire who went on to tour with the likes of Mick Jagger). Vai began playing with local bands and quickly became proficient on guitar. By the age of 18 he was attending the renowned Berklee School of Music in Boston. As a student, Vai transcribed several of Frank Zappa's most technically demanding compositions for guitar and even sent a copy of one such transcription, Black Page, to Zappa himself. Zappa was so impressed with the young guitarist that upon meeting him, he invited Vai to join his band. After a starting out as a music transcriptionist for Frank Zappa, Vai recorded and toured in Zappa's band from 1980 to 1982. He began a solo career in 1983. Steve subsequently released eight solo albums and won three Grammy Awards.

In 1999, he started his own record label, Favored Nations with the intention of showcasing artists who have attained the highest performance level on their chosen instruments.

Vai was born on June 6, 1960 in Carle Place, New York. He is the fourth son of John and Theresa Vai, both of Italian descent. Vai was first introduced to a guitar at the age of six after he saw another boy playing one at school though he didn't start taking lessons until 1973 when he was 12. His parents often played music at home and he cites the soundtrack to the 1961 film, "West Side Story," as being one of his early influences.

After finishing high school, Vai attended the Berklee College of Music in Boston, Massachusetts. While there, he began working for Frank Zappa as a transcriptionist after having sent Zappa a recording of his college band, Morning Thunder. He ultimately decided to leave Berklee and move to California midway through his fourth semester in order to pursue his professional career in music.

After moving to California, he started working as a session and touring artist for Zappa. He also continued transcribing Zappa's work. He continued working with Zappa until 1983. He then bought a house in Los Angeles and built his first professional studio. He formed two bands during this time – The Classified and 777.  He also compiled his own first studio album called "Flex-Able" and created his own record label, Akashic Records. He released "Flex-Able" on his own label in January of 1984.

In 1985, Vai joined David Lee Roth's post-Van Halen band as the lead guitarist. The band was comprised of Vai, Roth, Billy Sheehan, and Gregg Bissonette. They released an album, "Eat 'Em and Smile," in 1986. The album was both a critical and commercial success and reached the fourth spot on the Billboard 200 albums char. They toured with the album in 1986 and 1987. Their next album, "Skyscraper," was released in 1988 and was similarly successful. After the release of the album, Vai left the band and was replaced by Jason Becker.

From 1985 until 1990, Vai worked on his second studio album, "Passion and Warfare," at his home studio. He released the album in 1990 and it reached number 18 on the Billboard 200 charts. For the album, a number of guitar-oriented publications recognized it as "Best Album." It later became known as one of the most pertinent instrumental albums ever released. He also was featured on Whitesnake's album, "Slip of the Tongue," and joined the band on their subsequent world tour. He left the group in 1990 to continue his own pursuits.

Vai then formed a band with Devin Townsend, T.M. Stevens, and Terry Bozzio. They released an album, "Sex and Religion," in 1993, which is considered Vai's third studio album, and toured with it before disbanding. He then worked with Ozzy Osbourne in 1994 and recorded the "Ozzmosis" album. The same year, Vai won a Grammy Award for his work on Frank Zappa's album, "Zappa's Universe." 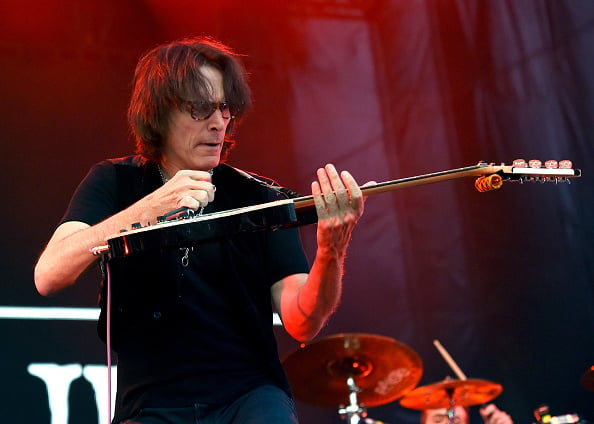 Vai then released a stripped-down EP called "Alien Love Secrets" in 1995 followed by his fourth studio album, "Fire Garden," in 1996. He then released "Flex-Able Leftovers" in 1998 followed by his sixth album, "The Ultra Zone," in 1999.  The same year, he provided the guitar for Joe Jackson's Symphony No. 1, which won the 2001 Grammy for Best Pop Instrumental Album.

In the early 2000s, Vai released "The Secret Jewel Box," a conceptual ten-CD box containing unique material from the duration of Vai's career. He also released "No Substitutions: Live in Osaka," on his record label in 2001, which won a Grammy for Best Pop Instrumental Album in 2002. He then released his seventh album, "Real Illusions: Reflections" in 2005. He joined the Zappa Plays Zappa tour in 2006 as a special guest. For his performance on "Peaches en Regalia," Vai won his third Grammy Award.

Vai has also done a considerable amount of work as a composer throughout the 2000s and 2010s. He premiered two original symphonies at the Steve Vai Festival in Groningen, the Netherlands performed by the North Netherlands Orchestra. He also continued working on his solo projects and released his eight album in 2012 called "The Story of Light" followed by his ninth, "Modern Primitive," in 2016 and "Inviolate" in 2022.

Vai's playing style is known for incorporating many special techniques like two-handed tapping, legato, hybrid picking, whammy bar acrobatics, and circular vibrato. Early on in his career, he started conceptualizing new guitar models to better accommodate his style. He is credited with the design of several guitars, including the Ibanez JEM guitar, the PIA guitar, and the seven-string guitar. He began working on these designs in 1985 and has continued doing so into the 2020s. Vai is considered by many to be a guitar virtuoso and was ranked by "Guitar World" magazine as the 10th Greatest Guitarist of all time.

Vai married Pia Maiocco, the bassist for the band Vixen, in 1988. The two had met some years earlier at the Berklee College of Music. Together, they have had two sons – Julian in 1989 and Fire in 1992. Both of their sons were coincidentally born on March 1. Vai maintains a residence in Encino, Los Angeles with his family. He is a vegetarian and a beekeeper. He maintains active beehives on his property in Los Angeles.

In 1987 Steve paid $330,000 for a home in the Hollywood Hills. The home features an expansive recording studio which has been rented-out by artists including Ozzy Osbourne, Eddie Van Halen and Slash. He sold this home in 2015 for $1.5 million. In October 2016, rapper 2 Chainz bought the home for $2.45 million.