Steve Stevens Net Worth: Steve Stevens is an American guitarist and songwriter who has a net worth of $45 million. Steve Stevens earned his net worth through his musical career playing for artists such as Michael Jackson, Billy Idol and others, as well as his solo performances.

He was born Steven Bruce Schneider on May 5, 1959, in Brooklyn, New York. Seven-year-old Stevens got a hold of his first guitar under the suggestion of the legendary protest musician Phil Ochs. He has honed his skills immersing himself in the great early 1970's Brit guitar heroes like Beck, Page and Clapton. An avid rock fan and an aspiring artist as he was, Steve enrolled in the prestigious LaGuardia High School of Performing Arts. Two years after his graduation, in 1977, he first performed with the North London band One Hand Clap, and then moved on to join the Fine Malibus in New York City.

It was during the early '80s that Stevens rose to fame, having hooked up with ex-Generation X singer Billy Idol, who had relocated to New York in hopes of embarking on a solo career. Stevens co-wrote and played on nine albums in total, including Don't Stop EP, Billy Idol (1982), Rebel Yell (1984), the remix collection Vital Idol (1985) and Whiplash Smile (1986).

Meanwhile, Stevens showcased his talent in numerous side project like recording with the Thompson Twins for their album, Here's To Future Days; guest performed with Madonna and Steve's friend Nile Rogers at the Live Aid concert; as well as backed Michael Jackson on the Dirty Diana track.

But since Stevens had longed to launch his own solo career, he would exit Idol's band by the end of the decade. His first release, Atomic Playboys, came in 1989 and received good comments from the critics and a moderate commercial response. The early '90s saw Stevens keeping up a busy schedule, both because of his solo and side-work with various artists. The rest of Steve's notable efforts include the 1999 solo album Flamenco a Go-Go, his performance with Vince Neil, followed by collaboration with Bozzio Levin Stevens, aka Black Light Syndrome. An in-demand session guitarist, Stevens also became a television personality on the E! show Married to Rock, alongside his wife, Josie Stevens. 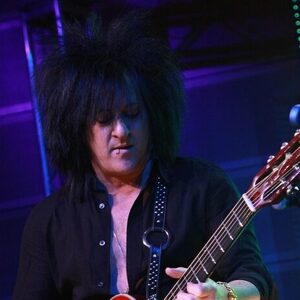